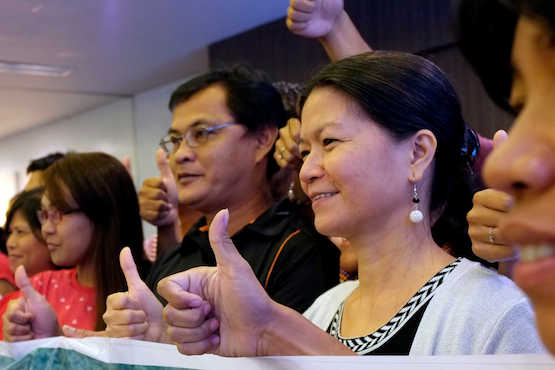 Yolanda Esguerra, national coordinator of PMPI and one of the respondents of a libel case file by a mining company, says the complaint is 'plain harassment.' (ucanews.com photo by Joe Torres)

A mining company has filed a libel suit against faith-based group, Philippine Misereor Partnership Inc. and four of its staff over reports on the mining company's attempt to recover a nickel ore stockpile on an island in the central Philippines.

The complaint filed by Hinatuan Mining Corporation stemmed from a PMPI report in June 2015 that a barge hired by the company allegedly destroyed small fishing boats off the coast of Manicani Island in the central Philippines.

Yolanda Esguerra, national coordinator of PMPI and one of the respondents, said the complaint is a "strategic legal action against public participation and plain harassment."

PMPI is a social development network of people’s organizations, faith-based groups, and Misereor, the overseas development agency of the Catholic Church in Germany.

Opposition by residents to mining operations, which has been supported by various groups including the Catholic Church, has been going on for years after Hinatuan acquired rights to mine on Manicani in Leyte Gulf, in 1987.

The firm stopped operations in 1994 due to falling nickel prices, but resumed in 2001.

Operations were again suspended in 2002 following local opposition supported by the Borongan Diocese.

Borongan Diocese, which covers Manicani, earlier voiced fears that continued mining on the island will result in "wanton destruction of the environment."