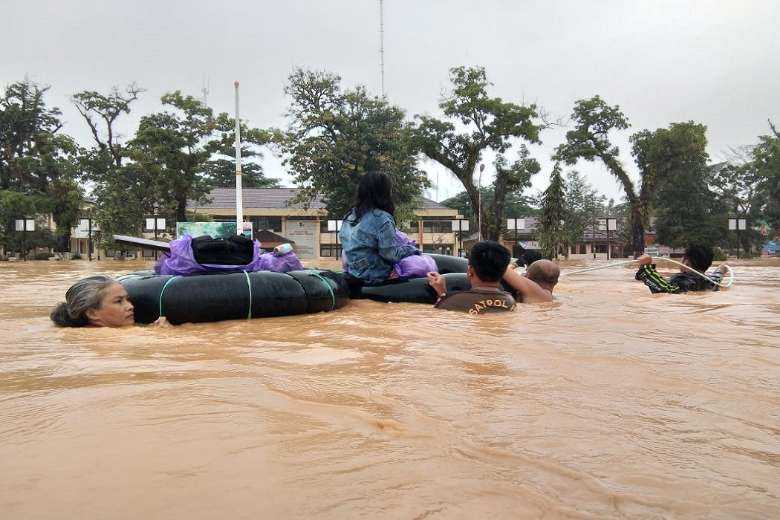 People use inflatable boats in Hulu Sungai Tengah district in South Kalimantan province on Jan. 15 after flooding hit the region. Environmentalists say the flood was the result of mining and palm oil operations. (Photo supplied)

Greed in the mining and palm oil plantation industries has caused massive ecological disasters, particularly in deforested areas such as in South Kalimantan, which was hit by flash floods last week, environmentalists have warned.

Heavy rain sparked floods on Jan. 15 that hit 11 of 14 districts and cities in South Kalimantan in which more than 20 people died. Several regions were still flooded as of Jan. 22.

According to the Regional Disaster Management Agency, 21 people died and six were still missing, while more than 67,800 people fled their homes. More than 19,400 houses and other places including 1,385 schools were inundated.

Activists say this and other ecological disasters that have hit Kalimantan in the past two years were the result of excessive mining and palm oil plantation operations which have impacted more than 30,000 local people.

Kalimantan on the island of Borneo is heaven for palm oil firms because the island has the biggest potential for plantation expansion, but this has made life hell for locals as an enormous amount of forest has been destroyed.

The Indonesian Forum for the Environment in South Kalimantan says there are 814 mines owned by 157 coal companies in Kalimantan that have laid waste to trees, thereby reducing rain absorption.

He said the remaining forest accounts for only 29 percent of the land in the province.

The Barito River, the main waterway flowing through Central and South Kalimantan provinces, can no longer accommodate runoff and often overflows, the environmentalist said.

He called for regional and central governments, as well as President Joko Widodo, to evaluate all permits given to local or foreign companies.

Widodo, he said, should revoke permits for companies that have triggered disasters and stop issuing new permits to save the forest and the people. "Ecological disasters will happen again if the government doesn’t act," he said.

Similar sentiments were expressed by Melky Nahar, of the Mining Advocacy Network, who said the recent flooding showed that Kalimantan was a ticking time bomb.

"It happened because forests have been sacrificed for mining and palm oil plantations,” he said. He said flooding occurred in 77 mining concession areas in South Kalimantan, which showed floods are closely linked to forest destruction by companies. “The government should halt giving concessions unless trees are replanted to prevent more flooding, otherwise it will happen again and again," he said. Widodo blamed the flooding on high rainfall and a weather anomaly while visiting flood victims in South Kalimantan on Jan. 19. "The Barito River couldn’t take the flow of water,"  the president said.

However, Frans Sani Lake, director of the church-run Justice, Peace and Integrity of Creation group in the Kalimantan region, accused the president of not accepting reality, saying the flooding was not triggered by extreme weather but by ecological damage.

“We were not surprised when parts of the island were flooded because Kalimantan is controlled by large palm oil plantations and mining firms,” he told UCA News.

He also called on the government to stop issuing permits for new concessions or expansions.

Arie Kompas, a Greenpeace Indonesia campaigner, said the flood was the result of 304,000 hectares of forest along big rivers, including the Barito River, having been converted into plantations from 2001 to 2019.

He said the forests in Kalimantan decreased significantly from 33.2 million hectares in 2000 to 24.8 million in 2017.