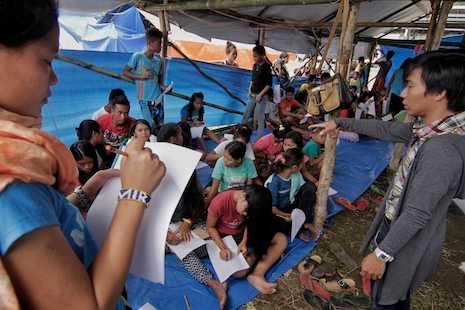 Manobo children attend classes in makeshift classrooms at the evacuation center in Tandag City in Surigao del Sur province. The villagers fled their homes after the killing of tribal leaders on Sept. 1. (Photo by Vincent Go)

Tribal villagers who fled their homes in the hinterlands of Mindanao for fear of attacks by gunmen are getting sick in a crammed evacuation center they are taking refuge in.

"To date about 60 people have been diagnosed with various illnesses," said nurse Judith Maisog, coordinator of a private health program in the area.

At least 170 villagers, most of whom are women and children, have already shown signs of illnesses, she said. On Sept. 8, a 4-year-old girl died from an unspecified illness.

For more than two weeks, some 3,000 Manobo tribal people continue to stay in makeshift shelters inside a sports complex in Surigao del Sur's capital city of Tandag.

"We are appealing for those kind-hearted individuals or groups to help us provide ointments, eye drops or medicines," said Maisog.

The exodus of the Manobos started Sept. 1 when members of the paramilitary group Magahat-Bagani Force allegedly killed Emerito Samarca, head of a tribal school in the village of Diatagon in Lianga town.

On the same day, gunmen shot and killed tribal leaders Dionel Campos and Aurelio Sinzo in front of the villagers.

Julieto Trinidal, a school teacher, said it took the people from his village one night to walk in the rain to reach the provincial capital.

"Even people from nearby communities have to flee," said Trinidal. "They were afraid that the gunmen will go after them." Manobo tribal families stay in makeshift shelters in a sports center in Tandag City in Surigao del Sur province. The villagers fled their homes after the killings of their tribal leaders on Sept. 1. (Photo by Vincent Go)

The group Save our Schools Network accused the Philippine military of having a hand in the attacks of tribal schools and communities that have been accused of coddling communist New People's Army rebels.

Reina Requioma, the group's spokeswoman, said "glaring cases of military attacks" on tribal schools have been documented in recent years.

The human rights group Karapatan also alleged that the military trained and equipped members of paramilitary groups behind the atrocities committed in tribal communities.

The military denied the allegations.

Datu Dangpanan, who described himself as spokesman of the Magahat-Bagani Force in Surigao del Sur, appealed for "fairness" in a telephone call to ucanews.com.

He said the stories that are coming out in the media were "machinations of leftists or [rebel] propaganda."

Dangpanan said it was the rebels who killed the tribal leaders and the school director in Lianga town.

In a separate phone interview, Datu Nahikyad Marcos Bocales, who described himself as commander of the Bagani Tribal Territorial Forces, accused "former members" of killing Samarca and the two tribal leaders.

Bocales told ucanews.com that the Bagani is a "legitimate organization" whose goal is to "defend tribal territorial areas." He said the organization has about 1,500 members in the region.

He also clarified that the Bagani is a separate organization from the Magahat, although he said both are anti-communist groups that are out to "totally eradicate either by force or by organizational tactics" the New People's Army.

Karapatan has called on the U.N. Human Rights Council to investigate the incident in Surigao del Sur "so the government cannot fudge the findings."