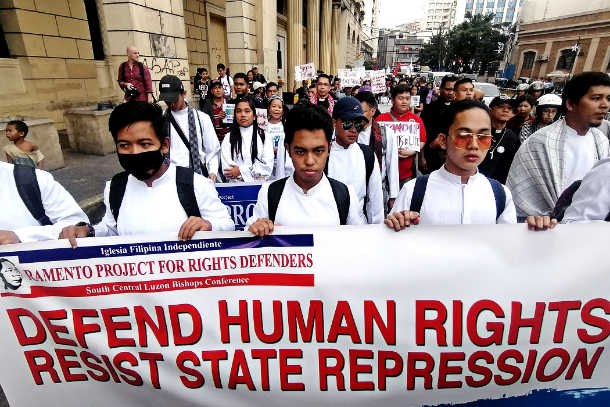 Church groups join calls for an end to human rights violations during the observance of Human Rights Day in Manila on Dec. 10. (Photo: Jhun Dantes)

A human rights group in the southern Philippines has welcomed a  government statement announcing the imminent lifting of martial law across Mindanao, but it called for an international probe into alleged atrocities committed by the military while it has been in force.

The group Barug Katungod (Stand for Rights) said two and a half years of martial law in the region had resulted in more than 162 killings. At least 704 cases of "fabricated charges," 284 cases of illegal arrest and detention, 1,007 victims of aerial bombardments and the forced evacuation of at least a million people were also reported.

"This announcement to end martial law will ultimately not bring relief for all the victims," said Bishop Redeemer Yanez of the Philippine Independent Church, convener of the rights group. The presidential palace announced on Dec. 10 — International Human Rights Day — that President Rodrigo Duterte will not seek another extension of martial law in Mindanao. "His decision is based on the view of security forces ... that the terrorist and extremist rebellion has been weakened," the president's spokesman Salvador Panelo said. Duterte placed the whole region of Mindanao under military rule in 2017 following the attack on the city of Marawi by Islamic State-inspired gunmen. The ensuing five-month siege killed more than 1,000 people, mostly civilians, and displaced about half a million others. Although initially imposed for 60 days, martial law was first extended until the end of 2017 and then until the end of 2018. It was again extended to the end of 2019 on the president's recommendation. A Catholic bishop in Mindanao had earlier warned against lifting military rule in the southern region, saying peace and order were unstable in some areas. Archbishop Martin Jumoad of Ozamiz said if martial law had to be lifted, it should only be in certain areas but not in the provinces of Jolo, Basilan and Maguindanao. Panelo, the president's spokesman, said the people of Mindanao "can rest assured that any incipient major threat will be nipped in the bud" even without martial law. The Philippine military establishment welcomed the president's decision and pledged to continue working with local officials to "sustain gains” brought about by martial law. Bishop Yanez, however, said "severe damage" had been inflicted on people’s human rights during the martial law period. He said it enabled the government to entrench 75 percent of the military’s combat forces in tribal and farming communities. "These communities are the guardians of the remaining last frontiers of natural resources that Duterte has pledged to foreign investors," said Yanez. He said that with the lifting of martial law, "it is high time that a comprehensive independent investigation by international human rights watchdogs be carried out." The Protestant bishop said the government and its armed forces have to account for the killings and other human rights abuses that have occurred during military rule. "If Duterte is not afraid of having committed human rights violations and crimes against humanity under martial law, he should allow these international investigators into Mindanao," he said.