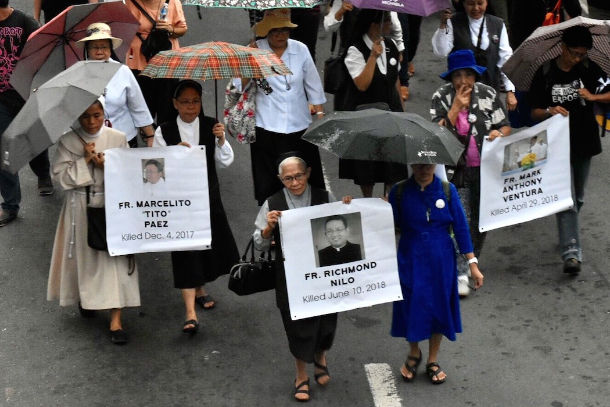 Catholic nuns carry placards with the name of slain priests during a protest march in Manila in June. (Photo by Angie de Silva)

Religious missionaries working in the southern Philippine region of Mindanao continue to live in "dangerous and dark times," in which justice is hard to come by, according to a group of Catholic nuns.

The killing of Italian missionary priest, Fausto Tentorio in 2011 remains unsolved to this day, the Sisters' Association in Mindanao (SAMIN), noted.

The nuns' organization decried what it described as "elusive justice" for the priest, slain in the compound of his parish church in North Cotabato province on Oct. 17, 2011.

Sister Virgencita Alegado of the Religious Sisters of Mercy congregation said missionaries in the Philippines continue to exist in a "precarious situation."

The nun, who is also chairwoman of SAMIN, said working to uplift the lives of tribal people has also become dangerous.

She said violence that plagued the southern Philippines when Father Tentorio was killed still lingers.

In a statement, the Mindanao nuns organization said religious who are "actively living out the Gospel" are "living in fear of their lives and safety" due to alleged harassment from security forces.

"The persecution of church people not only in Mindanao but in other parts of the country has now become systematic, especially for those working with the [tribal people]," the nuns said in a statement at the weekend.

Sister Alegado referred to the case of Sister Susan Bolanio of the Oblates of Notre Dame congregation who was accused in an online social media post of being a communist rebel.

The nun and her congregation denied the allegation. The military also said the accusation did not come from its ranks. In their statement, the nuns from Mindanao accused President Rodrigo Duterte's administration of "wantonly desecrat[ing] human life, trampl[ing] upon human rights, and is contemptuous of people's faith in God."

The Ecumenical Bishops' Forum described the situation of the church in the Philippines as "living in perilous times."

"Church people who join the pilgrimage of poor communities and support their struggle for justice, peace, and human dignity suffer state-perpetuated political persecution," said the bishops.

The Catholic and Protestant prelates cited the case of Australian nun Patricia Fox who has been ordered deported for allegedly participating in partisan political activities.

The missionary nun has been working in poor communities in the country for the past 27 years.

Over the past year, three Catholic priests working in rural areas were murdered.

SAMIN, an association of women religious and missionaries, was founded in 1983 "as a response to the signs of the times" when martial law was declared by the late dictator Ferdinand Marcos.