Numbers down for annual Philippine religious event in Marawi due to fake news, organizers say 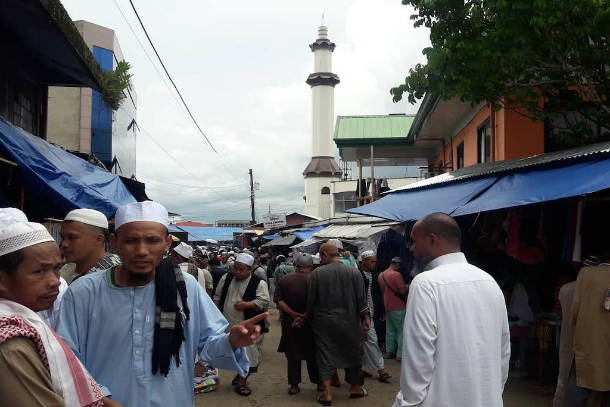 Organizers estimate that at least 6,000 people attended the three-day Islamic study and prayer meeting in the southern Philippine city of Marawi that ended on June 23. (Photo by Divina M. Suson)

Despite security assurances made by authorities, the number of Muslims who attended an annual religious gathering in the southern Philippine city of Marawi over the weekend was significantly down on past years.

Organizers said only about 6,000 people, compared to more than 10,000 in the past, attended the three-day "Joohur," or Islamic study and prayer gathering that ended on June 23.

Suaib Hassan, one of the organizers, said participants from abroad were not allowed by their governments to come to Mindanao.Only 15 members of the non-political global missionary movement, Tableegi Jamaat Ijtima, or Tablighi, from Oman, Pakistan, India and Bangladesh attended the gathering.This year's activities were held at the Abubakar Masjid in the Basak Malutlut area of the ravaged city where the 2017 conflict in Marawi began. In May 2017, a large gathering of Muslim missionaries provided cover for dozens of foreign militants who later joined local extremist groups who seized the city.
Related News Most of the foreign fighters reportedly answered a call from Malaysian militant leader Mahmud Ahmad to rescue Filipino fighter Isnilon Hapilon who was injured in a military offensive earlier that year in Mindanao.This year, Hassan said the names of participants were submitted to authorities. "We required the participants to bring their [identification cards], something we did not do before," he said.Hassan said, however, that it was not the strict security measures that caused the decline in participants this year."I believe it was 'fake news' on social media that had a big effect on people," he said. "The economic situation has also contributed," added Hassan.Days before the event, social media posts warned that members of the so-called Islamic State had entered Marawi and were preparing for another attack.Philippine authorities immediately denied the rumors, saying they had not received reports of a terrorist presence in the city.Abdul Manan, a participant, said the "real conflict" that Muslims face is "how they live their lives in line with what Allah wants.""That is the reason why we are here, so that we will make everyone understand true Islam," he said.
Support our Catholic journalism with a contribution of any size
Your contribution will help the Catholic journalists and editors in UCA News to report news, features, commentaries, video stories and podcasts on issues affecting the lives of millions of Catholics around the world.
Here is a gift of two valuable books as a token of appreciation to you.
Check your mailbox for links to these PDF/e-Books.