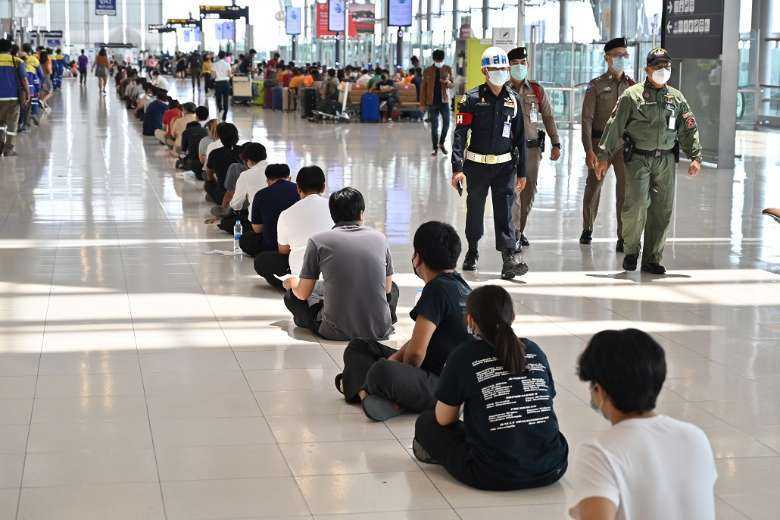 Airport workers wait in a queue to receive Covid-19 vaccinations while security personnel walk by at the departure terminal of Suvarnabhumi Airport in Bangkok on June 30. (Photo: AFP)

The Thai government’s plan to open up the country for foreign tourists despite a raging domestic outbreak of Covid-19 has got off to a slow start with only 249 visitors arriving on four flights from the Middle East on the first day of reopening on July 1.

All foreign visitors must go through a rigorous and costly procedure before they can land on the southern resort island of Phuket, where they will need to spend at least 14 days with their movements monitored and limited.

Phuket has been set up as Thailand’s first so-called sandbox where fully vaccinated foreign travelers can enter and spend their vacations without having to stay isolated in quarantine for 14 days, as remains the case for all foreigners who wish to enter the country via Bangkok.

The pilot project in Phuket has been launched to try and revive the country’s moribund tourism sector, which made up around a fifth of GDP before the pandemic and provided jobs for millions of Thais and migrant workers.

However, few Thais will likely benefit from the scheme because of the limited number of tourists.

Thailand received some 40 million visitors in 2019, but since early 2020 the number of visitors has dropped precipitously.

At most popular seaside travel destinations such as Phuket, apocalyptic-like scenes greet the occasional visitors

At least 2 million Thais have lost their jobs in the tourism sector since the beginning of the pandemic, with around 400,000 having done so in the first three months of this year owing to an absence of tourists, according to industry sources.

In the process, Thailand has lost about US$50 billion of tourism-related revenue since early last year.

At most popular seaside travel destinations such as Phuket, apocalyptic-like scenes greet the occasional visitors. Restaurants, hotels, bars, massage parlors and entertainment venues are shuttered while streets and beaches are deserted. They are hardly welcoming sights for foreign visitors.

“[Foreign tourists] will see buildings on sale, buildings for rent, shops closed, convenience stores closed. Do you think it’s a good environment for the tourist? No,” Srangsan Thongtan, a member of the Phuket Tourism Entrepreneur Development Association, was quoted as saying.

Most tourism-related businesses, especially smaller ones, have either gone bankrupt or are facing bankruptcy, experts say.

“It’s very hard to [re]open,” Srangsan said. “We don’t have a budget, we don’t have money to repair [and] repaint everything to bring our business back.”

At the same time, millions of Thais who made a living from tourism, particularly low-income earners, have been languishing without any income for more than a year.

Prolonged economic privation has caused mounting hardships for millions of poorer Thais and some of them have been driven to take desperate measures.

I’m a professional musician who’s been unemployed for two months. Every event was cancelled. Income = 0

Last week a female singer and musician, Prakaifa Pooldoung, 30, who was popular on YouTube, made headlines after she jumped to her death from a ledge in the parking lot of a multistory department store in Bangkok.

Prakaifa’s relatives said the young woman had lost all her sources of income after bars and entertainment venues where she performed were forced to close down as a result of an ongoing third outbreak of Covid-19 this year.

In Facebook posts last year, Prakaifa reached out to her fans, telling them of her increasing financial hardship during the initial phase of the pandemic.

“I’m a professional musician who’s been unemployed for two months,” she wrote last May during the first nationwide lockdown in Thailand. “Every event was cancelled. Income = 0.”