While many struggle under tight restrictions, those in state-run churches thrive 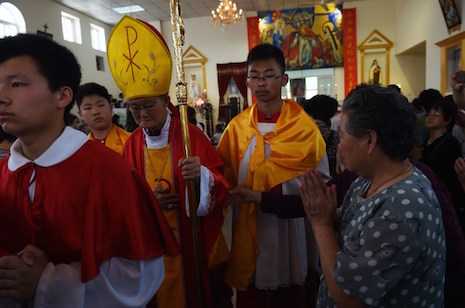 By Tom Hancock for AFP, Tianjin

Chinese priest Lin Xiuqiang is pleased with his new Catholic church, its tall tower topped with a cross — and grateful to the Communist officials who paid $19 million to build it.

China's Christians are divided between state-run churches, which pledge allegiance to the officially atheist Communist Party, and "underground" congregations who maintain their independence.

Dozens of church buildings have been demolished and crosses removed in recent months, in what has been seen as a tougher approach by the ruling party towards China's believers, estimated at around 70 million and growing.

But at the same time some local governments are allowing new spires to sprout and even showering funds on places of worship as they seek to woo the faithful to the official church.

Inside, light from its stained glass windows falls onto glass chandeliers, illuminating a huge crucifix and rows of barely-touched wooden pews.

The 120 million yuan (US$19 million) construction costs were paid by the local government, Lin said.

"We are happy. The church gives us a new place to practice our faith," he said, emerging from the church's wooden confession box.

But the Hedong church is aligned with the state-run Chinese Patriotic Catholic Association, and local Vatican-approved bishop Melchior Shi Hongzhen is barred from the premises.

The unheated facility, in the shadow of a busy motorway, is surrounded by damp ditches filled with construction waste, and at its entrance a statue of Jesus and Mary and a metal cross are both stained with rust.

"You can see how bad our environment is," said one male member of the congregation, who asked not to be named.

Tianjin, 110 kilometers from Beijing, is thought to have up to 100,000 Catholics, and each Sunday hundreds pack the dilapidated building, some sitting on the floor or standing outside, straining to hear the bishop's sermon over the rumble of passing trucks.

Worshippers said they had applied for permission to build a new church for more than a decade, without success.

"We are an underground church and we aren't owned by the government. That's the reason why they won't support us," said a female churchgoer surnamed Guo.

Since last year authorities in the eastern province of Zhejiang — a major center of Protestantism — have overseen a wave of church demolitions.

China Aid, a US-based advocacy group, estimates 30 churches were razed completely in 2014, and hundreds of crosses were removed from others — including many from state-backed facilities.

The campaign grabbed headlines worldwide, but appears to be something of an exception.

State media reported that 5,195 churches were built or renovated in the five years up to 2012, the last time such figures were released.

Local officials reportedly helped fund a megachurch with the capacity to host several thousand worshippers in the Zhejiang provincial capital Hangzhou, and a government website for neighboring Suzhou this year reported a million yuan investment in a Protestant facility.

In Fuzhou, in neighboring Fujian, a local government website records a 4.1-million yuan investment for a state-run Protestant church in 2013.

Yang Fenggang, an expert on Chinese religion at Purdue University in the US, said conditions for underground churches have worsened in recent years.

"The government tries to increase the competitiveness of the officially approved church in opposition to the underground churches," he added.

According to the US-based Pew Research Center, in 2010 China had 58 million Protestants and around nine million Catholics in the official and underground churches combined.

Rural churches are generally funded by worshippers themselves, with the government granting planning permission, analysts said.

"As long as it's within the official system, the government will be more tolerant," said Liu Peng, an expert on church-state relations for a government think-tank.

Local officials may be more likely to fund churches where underground communities are strong, he added.

Authorities in Beijing's wealthy Haidian district, a hotspot for unofficial churches, covered most of the reportedly multimillion cost of the modernist Haidian church, commissioned from German architects and completed in 2007.

Unofficial believers said they had no hope of getting their own buildings approved but still shun the state-backed facilities, instead holding services in makeshift spaces as mundane as an apartment above a dental surgery.

The unofficial "New Tree" church convenes in a dingy office building opposite a travel agency.

Asked about the gleaming state-run church nearby, a New Tree member surnamed Yang said contemptuously: "They have to keep aligned with official political views.