Although cases are falling, critics are accusing the government of a sluggish vaccination rollout Police attempt to douse an effigy of Nepal’s Prime Minister KP Sharma Oli set alight by the opposition alliance during a protest in Kathmandu on June 12 against the unconstitutional dissolution of parliament and early elections amid the coronavirus lockdown. (Photo: AFP)

Covid-19 cases have dropped significantly in Nepal with the government claiming to have got the second wave of the pandemic under control, but millions of people in the Himalayan nation remain unprotected without life-saving vaccines.

Nepal recorded 1,681 new cases on June 15 and 2,049 on June 14, a drastic decline from average daily cases of 9,000 in mid-May, according to data from the World Health Organization.

Prime Minister Khadga Prasad Sharma Oli told CNBC on June 15 that the “highly contagious and more lethal” second wave was under control and there had been a 75 percent decline in cases.

“It was like a crisis, a very serious crisis … when the wave started. Gradually, we took very serious measures and took serious steps to reduce and control the pandemic,” the PM said, adding that his country desperately needs more vaccines for its plan to vaccinate all the population by the end of 2021.

Nepalese authorities have faced intense criticism for unpreparedness and mishandling of Covid-19, including a sluggish vaccination drive while the pandemic was wreaking havoc across the border in India.

Amid a lengthy political struggle between the ruling Communist Party and opposition Nepali Congress Party that saw Nepal’s bicameral parliament dissolved twice in six months — the last time on May 22 — the nation collapsed when the second wave of the coronavirus struck in mid-April.

Nepal’s fragile healthcare system crumbled under huge pressure amid an acute shortage of hospital beds, medical staff and equipment including oxygen and ventilators.

At a daily rate of 6.51 deaths per million, Nepal at one point had the worst death scenario in South Asia. There were predictions that with the same rate the country would record about 35,000 deaths by mid-July.

According to Our World Data, Nepal has administered 2.9 million doses of vaccines and about 700,000 citizens have been fully vaccinated, which is about 2.5 percent of its population. The vaccines came mostly from India, China and Covax, a global alliance providing vaccines for poor countries. 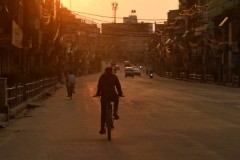 Nepal rolled out its vaccination drive in late January when Covid-19 cases from the first wave were on the decline. However, as it gradually opened up following lockdown, life returned to normal with political rallies, protests, religious festivals and unfettered public movement, and these turned into super-spreader events of the deadly virus.

The catastrophe forced the government to impose nationwide and zonal lockdowns with an aim to flatten the rising curve of the virus.

Unfortunately, corruption and administrative failures put a halt to the vaccination drive.

Nepali agents of Indian vaccine manufacturer Serum Institute connected to PM Oli’s party put forth a deal for a 10 percent commission that effectively prevented exports of 4 million doses of AstraZeneca vaccines. Nepal’s law has no provision for commissions for government-to-government deals. The commission pushed the price of each dose from US$4 to $6.05, Foreign Policy reported.

The agents, however, accused the government of shifting blame on them for its own failure due to bureaucratic complexities and poor vaccine diplomacy.

Health experts slammed the authorities for solely depending on India for vaccines as India banned exports of vaccines as Covid-19 ravaged its territories, leaving Nepal deprived of promised doses.

Nepal’s government has made urgent appeals to countries including the US, UK and China to procure millions of vaccines.

Media reported that Nepal received 1 million doses of Sinopharm from China this week. Another 43 million doses are required to vaccinate a significant portion of the populace including about 1.4 million elderly people desperately waiting for a second dose of AstraZeneca’s vaccine.