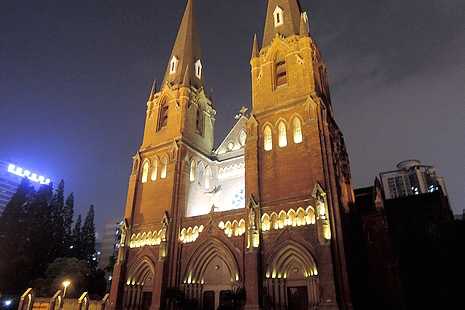 Substantial and unusual transactions in the tens of millions of yuan have reportedly gone missing from the Shanghai diocese to irregular accounts over the last year, intensifying trouble for the local Church on the anniversary of the house arrest of Bishop Thaddeus Ma Daqin.

Tens of millions of yuan have moved from one bank to another “under instructions from the party’s Religious Affairs Bureau officials,” a source told ucanews.com.

The Shanghai transactions are part of a larger countrywide invasion of Church accounts, estimated at 90 million yuan (US$14.3 million) over a number of years.

The funds were transferred to government and private accounts, according to ucanews.com sources, who spoke on condition of anonymity.

With the local bishop under house arrest for the past three years, the government has seized the opportunity to deepen its control of the diocese, Catholic sources said.

Compared with other dioceses in China, Shanghai is affluent due to the valuable properties in China's commercial hub that were returned to the diocese by the government following the rise to power of Deng Xiaoping in 1978.

“The diocese never needs to ask for money from outside. It helps other sister churches in China through its social service,” a Church source outside China told ucanews.com

Diocesan affairs are currently managed by a five-member management team. This allows Religious Affairs Bureau officials “loopholes to deepen their control,” said a Church source identified as Joseph and whose ability to comment accurately has been independently verified by ucanews.com.

Of the five priests in the management team, two are mainly responsible for diocesan finance. Joseph claims that large amounts of money go from one bank to another, “under the instruction of the party’s religious officials.”

The life of Shanghai’s open Church has been problematic since the death of Bishop Aloysius Jin Luxian in 2013. His death after many years of leading the revival of the Church in Shanghai and the exercise of greater freedom by the Church in China’s financial capital was compromised by the loss of leadership when Bishop Ma was detained.

Bishop Ma has been confined to the Sheshan Seminary in the Shanghai's Songjiang district since he dramatically quit his government appointed post in the Catholic Patriotic Association (CPA) immediately following his ordination on July 7, 2012.

The association is a government-sanctioned body operating under the Communist Party’s United Front and demands independence from the Vatican.

The United Front has leaders mostly selected by the Communist Party of China or are themselves party members. China’s President Xi Jinping has often advised the United Front to guide nonparty people, religious groups and ethnic minorities.

The CPA is shunned by most Chinese Catholics — those in the so-called “unofficial” Church and many who belong to the “open” Church.

“In all the management team’s meetings, the religious affairs officials must be present. So you can imagine what sorts of decisions it will make. They are also arranging their people to work in important diocesan departments,” Joseph said.

Another Shanghai source identified as Peter thinks the five-member team was appointed by Bishop Jin when he was bed-ridden before he died. “So it should be dissolved now,” he said.

“The missionaries had left us with a lot of Church properties. Before Bishop Jin passed away, he promised that the CPA could use some of the Church money. It was his way to buy some room for Church work that he wanted done. But after his death, no one dared to end this promise,” he said.

Now, the operations of the diocese are feeling the effects with one of two of the largest Catholic publishing houses in China, Guangqi Research Center, coming to a standstill. The center has published more than 400 titles on theology, spirituality, saints and catechetical formation over 25 years.

“We don’t know when the situation will change. We are not optimistic about the prospects," said a third source, Paul.

“Two other options for us in Shanghai are: having the government-sanctioned Church authorities in Beijing assign a bishop to Shanghai from elsewhere, or we have to elect one among our priests. But both are not feasible solutions for us,” said Paul.

Peter added: “Officials told Bishop Ma late last year that he would be freed if he became chair of the CPA. But in a coded message to say that his plan to stand down upon his ordination was premeditated, Bishop Ma rejected the offer explaining ‘you’d better let me die’.”