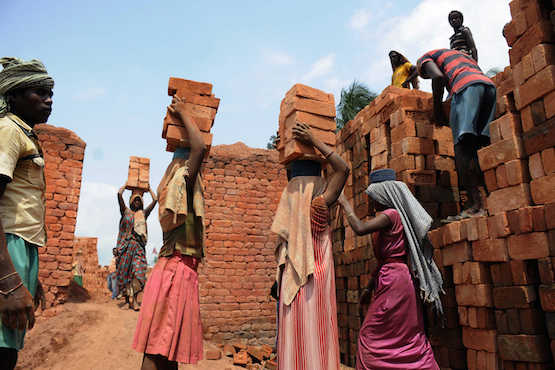 Indian women laborers carry bricks towards a furnace at a brick factory in Jirania, on the outskirts of Agartala, the capital of the northeastern state of Tripura, in this file photo. (Photo by Arindam Dey/AFP)

Millions of people are being subjected to "appalling" levels of slavery in India’s brick kiln industry, including endemic presence of debt-bondage and child slavery, a rights group says in a report released Sept. 20.

The report by Anti-Slavery International, the world’s oldest rights group, surveyed workers and brick kilns across Punjab, India, and found that the recruitment and payment systems underpin this cycle of slavery, trapping seasonal migrant workers in bonded labor year after year.

These practices affect a huge number of people, with at least 100,000 functioning brick kilns in India employing an estimated 23 million workers.

"We have found appalling levels of bonded labor and child labor in Indian brick kilns. Young children are working for nine hours a day in dusty air filled with chemicals rather than going to school, said Sarah Mount, Anti-Slavery International’s Asia Program Manager.

The report revealed that brick kiln workers are regularly cheated out of promised wages, live in cramped conditions and argues that the recruitment and payment systems are at the heart of the exploitation.

"It is time that the government takes … responsibility and ends this exploitation that shouldn’t be taking place in the 21st century," he said.