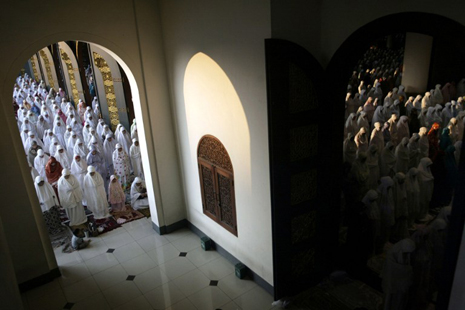 Tens of millions of Muslims in Indonesia celebrated the Eid al-Fitr holiday today as fears of fresh attacks at Buddhist sites prompted a security clampdown days after a temple bombing.

The past week has seen an exodus from cities in the world's most populous Muslim-majority nation, with people taking to cars, boats and planes to head home to their families across the archipelago of more than 17,000 islands.

Indonesia is one of the first countries in the Islamic world to kick off Eid celebrations, with people ending the fasting month of Ramadan with lavish feasts and by attending services at mosques and taking part in processions.

While most Indonesians were celebrating, it is an anxious time for the country's minority Buddhists after an attack on a temple in Jakarta on Sunday.

One person was injured when a small bomb exploded at the Ekayana temple as hundreds were praying, an attack motivated by anger at the plight of the persecuted Rohingya Muslim minority in Buddhist-majority Myanmar.

It sparked fears that radicals could be poised to launch further attacks on one of Islam's holiest days, as they shift from targeting the country's Christian and Muslim minorities to Buddhists.

Security was stepped up at Buddhist sites, with the number of police and guards at the famed Borobudur temple complex in Central Java doubled to 418, according to temple official Purnomo Siswo Prasetyo.

"Buddhist temples are one of the key locations we are securing," national police spokesman Ronny Sompie said.

More than 140,000 police had been deployed across the country in the past week to guard against attacks at all sites deemed vulnerable, including Buddhist temples, he added. Sidney Jones, a Jakarta-based terrorism expert from the Institute for Policy Analysis of Conflict, warned there could be further attacks.

"The problem is that temples are unfortunately an easy target, and young militants have always been opportunistic in their actions," she said.

Anger over the Rohingya has escalated in Indonesia in recent months, with police uncovering a plot to bomb the Myanmar embassy in Jakarta in May and hardliners calling for "jihad in Myanmar" during demonstrations.

Two waves of unrest between Muslims and Buddhists in the Rohingya home state of Rakhine last year left many dead and tens of thousands, mainly Rohingya, displaced. AFP