Protesters hold up images of jailed pro-democracy activists and make the three-finger salute outside Bangkok Remand Prison as they await the result of a bail hearing for three protest leaders on May 11. (Photo: AFP)

Portraits of Myanmar’s democracy icon Aung San Suu Kyi are common at the ongoing pro-democracy movements in the Royal Palace area of Bangkok. They also appeared during the pro-democracy demonstrations in Hong Kong.

In Myanmar, Thailand and Hong Kong, young people have been revolting for the past few months or years for different reasons but with the same drive and similar techniques. Thanks to online networks, these predominantly student-based movements know and support each other.For example, on March 1, when Myanmar’s military junta had killed about 50 anti-coup protesters on the streets, hundreds of young people in Myanmar posted on Twitter in support of 47 pro-democracy activists in Hong Kong who faced trial on sedition charges for their participation in an unauthorized assembly in 2019. “Hong Kong/Myanmar, together for democracy,” said one tweet.
Donate to UCA News with a small contribution of your choice
Some activists notice in this transnational momentum a blossoming of the “spring” of  Southeast Asian youth. Many young activists in Myanmar have already called their anti-coup protest a “spring revolution."The contexts of these revolts are different. In Myanmar, young people are fighting military rule at the risk of their lives. In Thailand, young students are demanding reform of the monarchy at the risk of being thrown behind bars for decades. In Hong Kong, young protesters are fighting an authoritarian regime based in Beijing.The common thread in these struggles gave birth to the Milk Tea Alliance a few months ago. The name of this informal online network comes from Hong Kong’s jailed pro-democracy student leader Joshua Wong, who defined it as a "pan-Asian pro-democracy movement opposed to all authoritarianism.”

The alliance is now a standpoint of protests against state-sanctioned abuses and rights violations across Asia, from Malaysia to Cambodia and the Philippines

The origin of the name dates back to pro-democracy protests in Hong Kong. Some Thai youngsters supported the Hong Kong movement by posting online comments that questioned Chinese authority in the former British colony. When some Chinese challenged the Thai postings, young people from Hong Kong and Taiwan joined to support the Thais. It led to a pan-Asian alliance against the repressive Chinese regime. The alliance is now a standpoint of protests against state-sanctioned abuses and rights violations across Asia, from Malaysia to Cambodia and the Philippines.

(Milk tea, typically tea mixed with milk, originated in 17th century Canton, the present Guangzhou region of China. Popularised by the British, the drink has become a daily need of ordinary people, particularly in South and Southeast Asia).

More than the messages of encouragement, the activists exchange tips and techniques for demonstrations. The modus operandi of these movements is similar, starting with the famous “be like water” inspired by a Bruce Lee movie. It is a technique that Hong Kongers began to use and consists of organizing several simultaneous demonstrations across the city and moving quickly. It also uses sign language to transmit messages to protesters far away, helping them evade the police.

In all these movements, young people also show a certain talent for staging and a sense for coining effective slogans such as “I need a relationship, not a dictatorship." It has also allowed “digital natives,” who grew up with the internet and social networks, to capture international media attention. 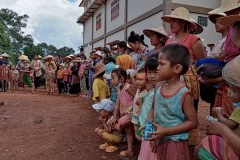 In addition to the question of the interference of the army (in Myanmar and Thailand) and respect for the right to vote, "these are movements very much turned towards individual freedoms," says Thai political scientist Thithinan Pongsudhirak.

For example, sexual minorities, in particular, are visible in all three movements. Pro-democracy students have marched alongside the Gay Pride in Hong Kong, Thailand and Myanmar, and several leaders have come out publicly as gay, a first in the public sphere.

Ethnic and religious minorities also play an important role. In Myanmar, where Buddhism is often confused with national identity in public education, the movement is highlighting minorities' rights that have been largely excluded from public performances, including the Karen and Kachin, two ethnic groups with a strong Christian presence.

Several leaders of the pro-democracy movement in Hong Kong, such as media mogul Jimmy Lai and Martin Lee, co-founder of the movement, are prominent members of the Catholic minority. These movements denounce people like Warong Dechgitvikrom, head of an ultranationalist Thai party, who projects minorities, whether sexual or religious, as foreign imports that serve Western interests looking to "destroy the national identity."

We want to ask the right to question the teachers, and not have to prostrate ourselves in front of them

In all three territories, the young activists of the Milk Tea Alliance denounce social inequalities that are particularly marked in this region. According to the GINI indicator, Thailand and Hong Kong are among the 10 most unequal territories in the world. These regions also entertain a system of patronage, which systematically differentiates people and seeks allegiance to the richest and oldest, sometimes to the detriment of the rule of law.

Reform of education was one of the main demands of Thai students. "We want to ask the right to question the teachers, and not have to prostrate ourselves in front of them," explained Benjamaporn Nivas, the leader of the Bad Students movement, which was active in the demonstrations last fall in Bangkok.

However, the three movements seem to be in trouble. In Myanmar, terror reigns and the number of demonstrators decreases every day. In Thailand, the student leaders were imprisoned and then released while awaiting trials in which they risk decades behind bars. In Hong Kong, Beijing's advance in political and social affairs seems unstoppable.

Yet some advances have been made, although they are difficult to be measured. In Thailand, it has become possible to speak about the king in public or not to stand during the national anthem without risking being beaten up or arrested.Through continuous and visible mobilization on the networks, the young people of the Milk Tea Alliance are creating some important changes in the whole Asian continent, especially in terms of freedom of expression.