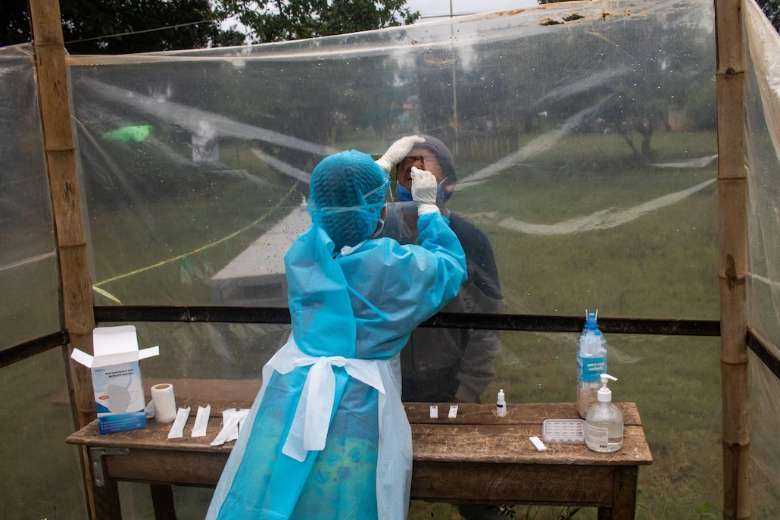 A nurse tests a patient for Covid-19 at a health centre in Demoso township in Myanmar's Kayah state last October. A handful of nurses hiding from the junta run makeshift clinics to treat Covid patients and resistance fighters using medicine smuggled past military checkpoints. (Photo: AFP)

Myanmar’s military has continued targeting churches, civilians in ethnic areas and Catholic villages in the Bamar heartland, ignoring calls by world and religious leaders to end the attacks.

Two people, including one who was mentally disabled, were shot dead and three people were severely beaten during a raid by the military in Chan Thar village in the Sagaing region on Jan. 10.

Soldiers reportedly destroyed statues and property of villagers and looted their belongings, according to local sources.

Hundreds of Catholic villagers fled to safe areas as the troops entered the village after artillery shelling.

Clashes recently erupted between the military and local militia groups in villages near Chan Thar, according to local media.

Some Catholic villagers from Chan Thar had already fled their homes and sought refuge in the parish near Mandalay.

“I strongly condemn the acts, especially destroying the statues, and I call for bringing justice and accountability,” a priest from Chan Thar village wrote on Facebook.

In recent weeks, many villagers from another Catholic village, Chaung Yoe, in the Sagaing region have fled their homes as junta troops were stationed in the village school.

Chan Thar village in the Archdiocese of Mandalay is also known as Bayingyi village, where people descended from Portuguese mercenaries or adventurers who arrived in the 16th and 17th centuries settled.

Missioners of the Paris Foreign Missions Society (MEP) began work in Chan Thar in the mid-19th century and the village has a considerable Catholic population in a predominantly Buddhist region. The area has produced many bishops, priests and religious nuns and brothers.

The latest military assault came as thousands of people in Kayah state have been forced to flee their homes due to airstrikes and artillery shelling following an escalation in fighting with militia groups.

A handful of churches belonging to Catholic, Baptist and other denominations in the Christian strongholds of Chin state in the west and Kayah state in the east have been bombed and destroyed in deliberate attacks by junta forces.

Four dioceses — Hakha, Kalay, Loikaw and Pekhon — out of the 16 dioceses in the conflict-torn nation have been badly hit following last February's military coup that triggered peaceful demonstrations and a growing resistance by newly emerged militias.

The rising conflict, particularly in predominantly Christian regions inhabited by the Kayah, Chin and Kachin minorities, resulted in churches being shelled and raided. Priests and pastors have been arrested while many unarmed civilians, including Christians, have been killed.