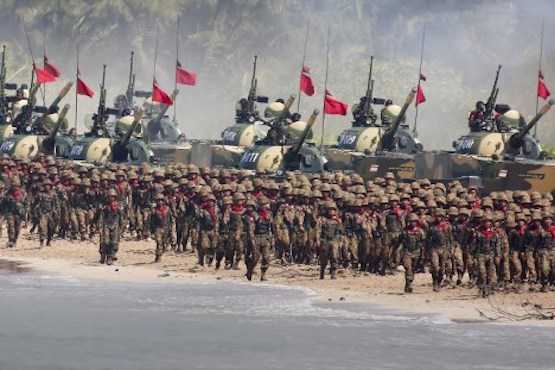 Myanmar military troops and tanks move in formation along a shore during joint military exercises on Feb. 3. The army has been accused of a 'land grab' by building security posts on torched Rohingya villages. (Photo by Lynn Bo Bo/AFP)

Rights advocates have expressed outrage over the Myanmar military's policy of building security installations on top of razed villages from which the Rohingya minority have fled alleging a state campaign of persecution.

Rakhine State in Myanmar has been marred by episodes of violence in recent months that has seen over 670,000 Rohingya Muslims flee to neighboring Bangladesh, where they eke out an existence as refugees in squalid camps.

The rights monitor used satellite images and interviews to highlight the rapid increase of military infrastructure and other construction projects this year, which the researchers described as a "land grab."

AI is concerned the new construction work by the army will dampen the prospects of the refugees being repatriated as mapped out in several recently signed deals.

While the military claims it launched counteroffensives in response to militant attacks in Rakhine State in October 2016 and August 2017, the United Nations has dubbed the campaign an example of ethnic cleansing.

The repatriation was due to begin in late January but Bangladesh set back the date citing problems related to documentation and logistics.

Meanwhile, many of the refugees have opposed the deal. They have blasted it for failing to include a guarantee of their safety or any attempt to protect their basic civil rights including citizenship status in Myanmar, which does not officially recognize them as nationals.

Satellite imagery provided by AI confirmed that at least three new security bases are being built in Rakhine State — two in Maungdaw Township and one in Buthidaung Township.

Construction appears to have started in January.

The largest of the new bases is in Ah Lel Chaung village in Buthidaung Township, where eyewitnesses said the military has forcibly evicted the Rohingya from some areas to pave way for construction.

Many villagers claim they had no option but to escape to Bangladesh, according to the AI report. A Rohingya girl stands in front of newly arrived refugees who fled to Bangladesh from Myanmar in this Sept. 6, 2017 file picture. (Photo by K M ASAD/AFP)

Arakan Project is a Rohingya advocacy group named after the former kingdom that held sway in Rakhine State. Chris Lewa, the group's director, confirmed the alleged land grab and militarization now taking place in the region.

Lewa gave the example of a village in the westernmost town of Buthidaung where the government is preparing to build a base for its Border Guard Police (BGP).

"What is more concerning is that even some of the villages that were not burned down have now been completely destroyed so their trees and ancestral living areas can't be traced," she told ucanews.com.

"They want to wipe out the whole camp," she said.

Amanullah, 22, is a Rohingya refugee from Inn Din village in the Maungdaw area of Rakhine State, where armed forces and Buddhist extremists massacred hundreds of the minority group.

He fled to Bangladesh last November with his seven-member family and now resides in the Kutupalong refugee camp in Cox's Bazar.

"Myanmar doesn't want to see the Rohingya return home, so after destroying our homes they are now occupying our land," Amanullah told ucanews.com.

"Myanmar signed the [repatriation] deal due to international pressure, but in actual fact it is working to the make our lives miserable in every possible way."

He said he wouldn't consider returning unless the military stops appropriating the Rohingya's land.

"The Myanmar government said us refugees would be placed in temporary camps, but we want to know why we can't go back to our ancestral homeland," Amanullah said.

"By seizing our land the military is making it clear it doesn't want us back. We fear attempts may be made to kill us when we reach the camps," he said.

"So we don't see any reason to go back there, just to die. We have totally lost faith in Myanmar."

Sultan, another Rohingya from Maungdaw, confirmed the construction of the military bases on destroyed Rohingya villages.

"Myo Thu Gyi village has already been cleared for a planned military base," Sultan, one of about 70,000 Rohingya who remain in Myanmar, told ucanews.com.

Abul Kalam, the commissioner of Bangladesh's state-run Refugee Relief and Repatriation Committee, said the latest move is another blow to peace efforts.

"We are not fully aware of this development in Rakhine but media reports show us what is going on," Kalam told ucanews.com.

"Setting up security posts on top of Rohingya villages would deal a blow to the repatriation process because many refugees would refuse to return," he said.

"We must follow international standards and ensure the safety of refugees in Rakhine before they are sent back. We can't start repatriating them unless there is some guarantee they will be allowed to live in peace."

"The bulldozing work is mainly being done to prepare burned areas for resettlement and reconstruction efforts," he told international media on March 12.

"It only covers areas where structures have already been burned down."