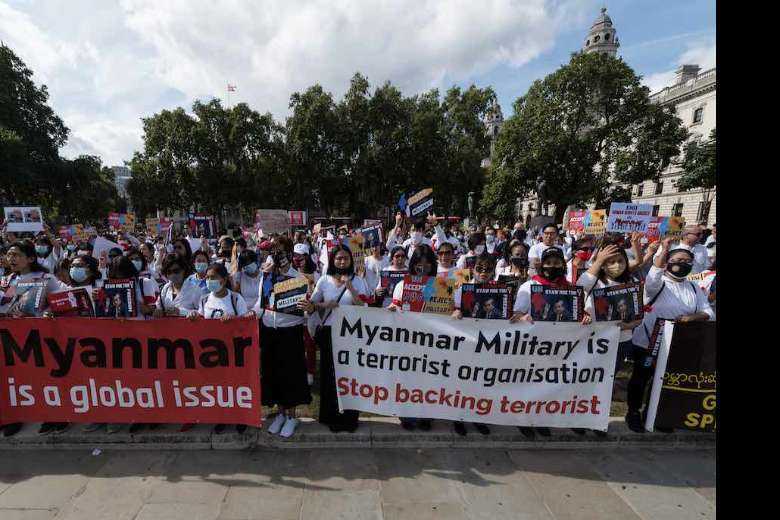 Members of British Myanmar community and their supporters demonstrate in Parliament Square against the military government in London  on September 11, 2021. Protesters call for the UN Member States to recognise the pro-democracy National Unity Government of Myanmar during the upcoming UN General Assembly meeting in New York. (Phot: Wiktor Szymanowicz / Anadolu Agency via AFP)

A church in Myanmar’s western Chin state, a predominantly Christian area, has been attacked by the military as fighting intensifies in the region.

The Johnson Memorial Baptist Church in Thantlang town was hit by artillery fire on Sept. 14 night, according to Christian sources and local media reports.

There were no reported casualties despite the church windows being broken and the roof damaged.

The attack came after the military air strike and artillery attack on Lungler village, Thantlang township, following the overrunning of a military outpost by a team made up of the Chin National Army and local resistance group Chinland Defense Force last week that killed at least 12 soldiers.

More than 1,800 people from various villages in Thantlang township have fled across the border to Mizoram in northeast India, while some people sought refuge at nearby villages in the period between Sept. 10 and Sept. 14, according to aid groups.

Various Christian churches have condemned the disrespectful acts of the soldiers, including the consumption of alcohol inside places of worship, and called this a violation of the Geneva Convention.

More than 16,700 people have already been displaced in several townships in the western state. They include those who have taken refuge at churches since fighting flared up in the region in May.

Amid the recent conflict, churches have been raided and shelled and troops stationed in church compounds, while priests and pastors have been arrested and unarmed civilians, including Christians, have been killed.

Christians in ethnic minority areas such as Kachin, Kayah, Karen and Chin states have historically faced oppression and persecution under more than five decades of iron-fisted military rule.

Myanmar’s military has stepped up troop deployment to crack down on local resistance groups, especially in Sagaing and Magwe regions and Chin state following a call for a people’s defensive war by the National Unity Government (NUG), the shadow government in exile established by ousted lawmakers, activists and ethnic groups.

“The international community obviously cannot be relied upon to intercede on behalf of the democracy movement and secure the safety and well-being of the people of Myanmar from the frontal and brutal assault of the military junta,” the NUG said in a Sept. 13 statement.

Southeast Asian and Western governments have urged all sides to refrain from violence and pursue dialogue but the military junta continues to arrest, torture and kill people as well as burn houses.

Myanmar has descended into chaos following the military coup on Feb. 1, with increasing deaths in villages and daily protests, fighting in ethnic areas and widespread strikes.

Nearly 1,100 people have been killed and at least 7,000 detained by the junta since February.