Members of the People's Defence Force make handmade guns to be used in fighting against security forces near Demoso, Kayah state. (Photo: AFP)

In a 31-page report titled "Access Denied: the Myanmar Military Junta’s Deprivation of Lifesaving Aid to Karenni State," Fortify Rights group called on the governments of Thailand, India, China and Bangladesh to immediately authorize humanitarian agencies to provide cross-border aid to growing numbers of civilians in need in Myanmar.

The new report also documented the arbitrary arrests of 14 aid workers in Kayah state. These arrests have created a chilling effect among local and international humanitarian agencies, instilling well-founded fears that the junta may target them for carrying out their legitimate activities.

On June 9, the army destroyed and burned stockpiles of rice stored at a school in Loi Yain Taung Chae village in Pekhon township in Shan state, which borders Kayah state where the stock of rice was intended for 3,000 internally displaced persons (IDPs). The soldiers also set fire to an ambulance and a nearby private vehicle, according to the report.

We only have enough food for one or two weeks. We are feeling insecure and scared, and we don’t know when the next attack will happen

The impacts of the denial of aid to displaced civilians are severe as displacement sites in Kayah state still lack basic resources, including potable water, health care and sanitation facilities.

“Despite having a hideout, we still don’t have water,” said a Karenni man who fled his home in Kayan Thayar village in Loikaw township in May due to army attacks.

“We only have enough food for one or two weeks. We are feeling insecure and scared, and we don’t know when the next attack will happen,” the man told Fortify Rights.

The ongoing attacks forced the displacement of more than 100,000 people in Kayah state and more than 223,000 nationally, according to the rights group. 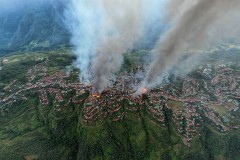 “Blocking aid and targeting humanitarian workers in the context of armed conflict are war crimes,” Ismail Wolff, regional director of Fortify Rights, said in a statement on Nov. 10.

“The Myanmar junta poses a threat to regional peace and security. UN and ASEAN member states should urgently support emergency cross-border aid for the displaced and ensure accountability for the junta’s heinous crimes.”

The rising conflict, particularly in predominantly Christian regions inhabited by the Kayah, Chin and Kachin, has resulted in churches being shelled and raided. Priests, pastors and church social workers have been arrested while many unarmed civilians including Christians have been killed.