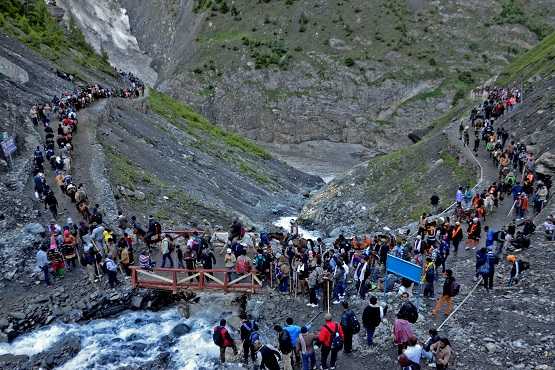 Hindu pilgrims trek the treacherous path snaking through the hills to pay respects at the holy Amarnath cave in this file photo. A study has recommended restricting the duration and numbers of people for the pilgrimage because of the environmental issues it creates. (Photo by Umar Asif)

Controversy is swirling around a popular Hindu pilgrimage in the hills of Muslim-dominated Jammu and Kashmir state in northern India, with local people demanding restrictions be placed on the annual festival because of pollution concerns but Hindu nationalists decrying it as an infringement of their religious rights.

A study released April 21 said the annual Amarnath Yatra pilgrimage was polluting the surrounding area with garbage, causing water-borne diseases to spread. They recommended the event be restricted to its original length of 15 days, down from 55.

The report, Amarnath Yatra: a Militarized Pilgrimage, compiled by non-government organization Equations and Jammu and Kashmir Coalition of Civil Society, said Hindu nationalists have used the event to further their goal of Hindu hegemony.

For more than 60 days each year, between July and August, over half a million Hindus take the perilous five-day trek, known as the Amarnath Yatra, to pay homage to lord Shiva, the destroyer god in the Hindu trinity.

The pilgrimage route goes to the Amarnath cave, located 3,800 meters above sea level, which houses a nine-foot-tall ice sheet considered to be the symbol of lord Shiva, one of the most revered of Hindu gods. The journey is assisted and supported by Indian army, hence the term "militarized."

Swati Sheshadari, a member of the research team, told ucanews.com that the traditional duration of 15-days has increased to 55 owing to pressure from socio-religious Hindu organizations. "The socio-religious organizations involved in the pilgrimage by their own admission are furthering the cause of a nationalist Hindu state," Sheshadari said.

The study analyzed data collected from government departments, interviews with government officials in Kashmir, all authorities and organizations, and people in the cities of Kashmir, Jammu, Delhi and Ludhiana and secondary sources, the study team said at the media conference.

However, Hindu organizations said the study was an interference in the religious affairs of the Hindu community.

One nationalist group, the Shiv Sena Hindustan has threatened to launch a state-wide agitation to protest the restriction. "Religious shrines are for the promotion of peace, tranquility and brotherhood and not to create disputes among communities," Rajesh Kesri, organization president, said.

He added that the demand to cut down the pilgrimage duration is "a conspiracy against Hindus."

"Hindu bodies will not budge an inch from their demand that pilgrimage should commence from traditional date of Jesht Purnima (June 20) and culminate on Raksha Bandhan (August 7)," Rama Kant Dubey, the Hindu council state chief said.

Heavy on the environment

The report said that pilgrims left 51,000 kilos of human waste in the open that mixed with the tributaries of the region's rivers causing water-borne diseases in lower areas of Kashmir.

"We aren't against the pilgrimage. However, under the garb of pilgrimage, the ecology, demography and geopolitics of the region is being played with," said rights activist, Gautam Navlakha.

He said that the Betaab valley basin, a camp site for trekkers, is part of the Indus Water Treaty and "any change to it could destabilize peace in the region," he said, indicating the fragile relations between India and neighboring Pakistan.

The water treaty between the arch-rivals agrees on a system to share water from six rivers in the region, leaving the responsibility to control three eastern rivers to India and three western rivers to Pakistan. Since the source of Indus river basins are in India, Pakistan feared India could poison or cause droughts in Pakistan in times of war, resulting in the World Bank-brokered treaty in 1960.

The study wanted the Indian government to limit the duration and number of people taking the journey. Besides the government should de-militarize it, study its environmental impact and regulate the influence of socio-religious organizations, it said.

The pilgrimage first started when a shepherd discovered the peculiar ice formation in the cave in the late 1700s, which a Hindu priest visited and declared the mythical home of lord Shiva. Until the Indian state was formed in 1947 pilgrims were only few a thousand, mostly ascetics and pilgrims from adjoining areas.

Numbers rose in the mid-1980s and then dipped when armed militancy hit the region. The number of pilgrims steadily increased to 600,000 in 2010 and the duration of the pilgrimage, traditionally two or three weeks, was slowly widened to a six and then eight.

After floods killed more than 300 people in 2014,  Swami Agnivesh, a Hindu religious leader and social activist, held the pilgrimage partly responsible. He also told media in 2014 India gives importance to the pilgrimage to keep intact the Hindu presence in Kashmir.