Aris Sumarsono, aka Zulkarnaen, was a former military commander of the Jemaah Islamiyah terrorist group in Indonesia 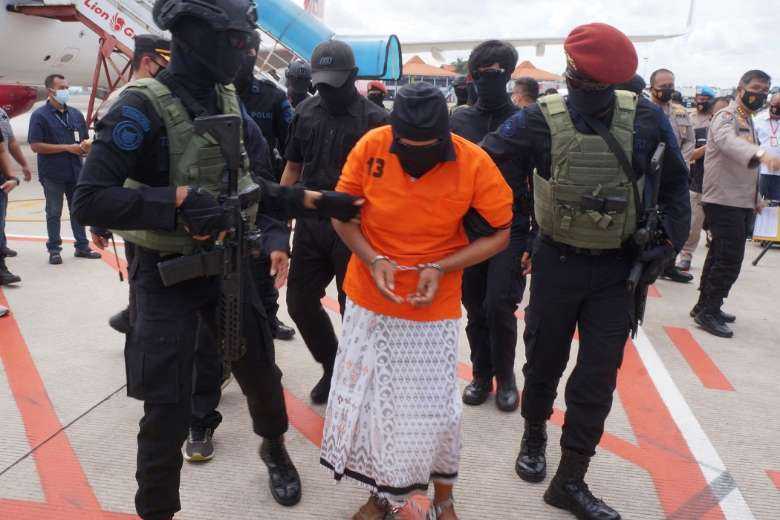 Police escort Zulkarnaen, a senior leader of the al-Qaeda-linked Jemaah Islamiyah group, who had been on the run for his alleged role in the 2002 Bali bombings, at Jakarta’s Soekarno-Hatta International Airport on Dec. 16, 2020. (Photo: AFP)

An Indonesian court has sentenced a high-ranking militant to 15 years in jail for crimes linked to the 2002 Bali bombings and other deadly terrorist attacks.

Aris Sumarsono, 58, commonly known as Zulkarnaen, was a military commander in the Jemaah Islamiyah terrorist network blamed for a series of attacks in Southeast Asia, including the Bali atrocity in which more than 200 people were killed, mostly Westerners.

He was convicted by the East Jakarta District Court on Jan. 19 of aiding and encouraging terrorism by lending money and giving shelter to militants and withholding information about attacks.

He was arrested in December 2020 in Lampung Timur district of Lampung province after having spent 18 years on the run.

Zulkarnaen “is proven guilty of carrying out acts of terrorism” and “deserves a 15-year imprisonment,” the court judge said.

The sentence was lighter than the life imprisonment demanded by prosecutors, who told the court that a special unit under Zulkarnaen’s command in Indonesia and the Philippines had carried out numerous attacks.

Prosecutors had accused Zulkarnaen of playing a direct role in planning the 2002 Bali bombings, Indonesia’s worst terrorist attack, but he denied any involvement.

The court dismissed the charge that he helped mastermind the bombings because the statute of limitations had expired but convicted him instead of harboring other suspects in the attack and withholding information about it.

Stanislaus Riyanta, an intelligence analyst from the state-run University of Indonesia, told the Reuters news agency that Zulkarnaen will require constant monitoring, even behind bars. “He can spread his radical ideology in prison,” he said.

In January last year, Jemaah Islamiyah's spiritual leader Abu Bakar Ba’asyir walked free after serving the bulk of a 15-year prison term for running a terrorist training camp in Aceh province. He previously served a 30 month term for his role in inspiring the militants behind the Bali bombings.