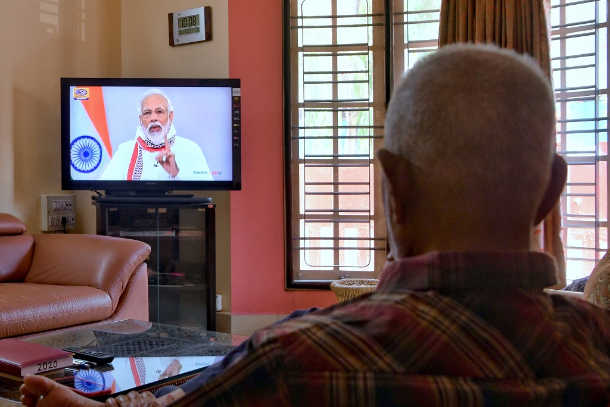 A senior citizen watches Indian Prime Minister Narendra Modi address the nation in a television broadcast when he announced that the coronavirus lockdown would be extended until at least May 3. (Photo: Manjunath Kiran/AFP)

Church leaders and activists in India have expressed dismay after several hundred migrant workers in Mumbai, the state capital of Maharashtra, gathered near a railway station demanding the government send them back to their homes.

Soon after Prime Minister Narendra Modi announced on April 14 that the nationwide coronavirus lockdown would be extended until May 3, more than 1,000 migrant workers assembled near Bandra station demanding transport be arranged so that they could return to their villages.

Police had to disperse them with canes but they were assured that they will be provided with accommodation and food for the duration of the lockdown, a police official said.

“It is a matter of concern for the government and all of us because we have to make sure that vulnerable migrants don’t suffer and we have to fight together against Covid-19, which has taken many lives in our country,” Father Jaison Vadassery, secretary to the Conference of the Catholic Bishops’ of India Commission for Migrants, told UCA News.

“We can’t ignore their plight because they are the ones who are suffering the most during the lockdown. We have to collectively work to address their situation because many have run out of money and depend on the mercy of others.

“The government has to ensure that they are properly taken care of as media reports said many have little food and are being harassed by their landlords.”

Maharashtra's Chief Minister Uddhav Thackeray said rumors about the resumption of train services could have led to the gathering as many migrant workers thought that the lockdown would be lifted on April 14 and they could board trains to take them home.

Thackeray appealed to migrant workers to remain calm and said authorities are investigating the incident, adding that the government is in talks with agencies to help migrant workers return home.

Daily-wage earners have been rendered jobless since the lockdown was announced by Modi on March 24 to stem the spread of Covid-19, making their life a constant struggle.

Although the authorities and NGOs have made arrangements to give them food, most want to return to their native places to escape the hardships brought about by the sweeping curbs.

Aaditya Thackeray, state tourism minister and son of the chief minister, blamed the federal government for the incident at the train station and sought a roadmap to facilitate transport for migrant workers.

He said a survey of migrant workers’ camps revealed that they want to return to their home villages. "Many are refusing to eat or stay in these camps," he said.

More than 600,000 people are housed in several shelter camps across the state.

“The Mumbai migrants gathering in thousands is understandable as similar incidents have occurred in Surat, Ahmadabad and Hyderabad. It is natural because the government rations have not reached the migrants,” Joseph Dias, general secretary of the Mumbai-based Catholic Secular Forum, told UCA News.

“NGOs and those from Christian and other faiths as well as the private sector bear the brunt of providing relief. If no action is taken, there could be further mass unrest. The government must be sensitive to the lowermost rungs of society.”

Meanwhile, the Archdiocese of Bombay has offered four schools to be used as quarantine centers.

About nine million people migrate from one state to another each year, according to the Economic Survey of India 2016-17. This is nearly double the rate of interstate migration recorded by the 2011 national census.

The National Sample Survey of 2010 estimated that one in 16 people in urban India was a slum dweller. According to the 2011 census, 68 million people live in slums, representing 20.1 percent of the urban population.