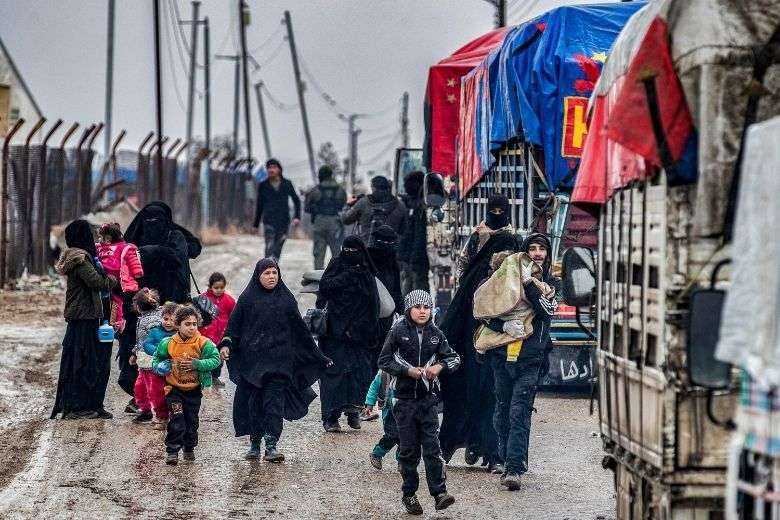 A man carries a child as he walks with other women and children ahead of a member of the Syrian Kurdish internal security services known as Asayish as they head towards trucks during the release of persons suspected of being related to Islamic State fighters from the Kurdish-run al-Hol camp in northeastern Syria, on Jan. 19. (Photo: AFP)

In a joint letter, a group of church leaders and international figures appealed to U.S. President Joe Biden to lift economic sanctions imposed on the Syrian people and "to help Syrians alleviate a humanitarian crisis that threatens to trigger a new wave of instability in the Middle East."

"We wish to lose no time approaching you for an urgent response to the severe humanitarian crisis in Syria," they wrote Jan. 21, after first congratulating Biden on his inauguration.

They pointed out that in December, Alena Douhan, U.N. special rapporteur on unilateral coercive measures, asked the United States to lift the sanctions.

Their letter cited what was stated by Douhan, that the U.S. sanctions "violate the human rights of the Syrian people" and "exacerbate the already dire humanitarian situation in Syria, especially in the course of COVID-19 pandemic, by blocking aid, trade and investment necessary for Syria's health system and economy to function."

The appeal noted that Douhan's findings reflect a growing consensus among humanitarian and human rights groups that "this form of collective punishment of the civilian population is driving Syria into an unprecedented humanitarian catastrophe."

They stressed that 10 years ago, Syria was the region's food basket, but now it is on the verge of famine.

In June, the World Food Program warned that half of all Syrians were going to bed hungry and the country was on the brink of "mass starvation."

Meanwhile, COVID-19 is spreading, unhindered by a health care system largely destroyed over 10 years of war, the letter said.

"Millions of hard-pressed Syrians will go to bed hungry and cold tonight," the letter stated. "Unilateral coercive measures imposed by the United States make the economic plight of the Syrian people worse."