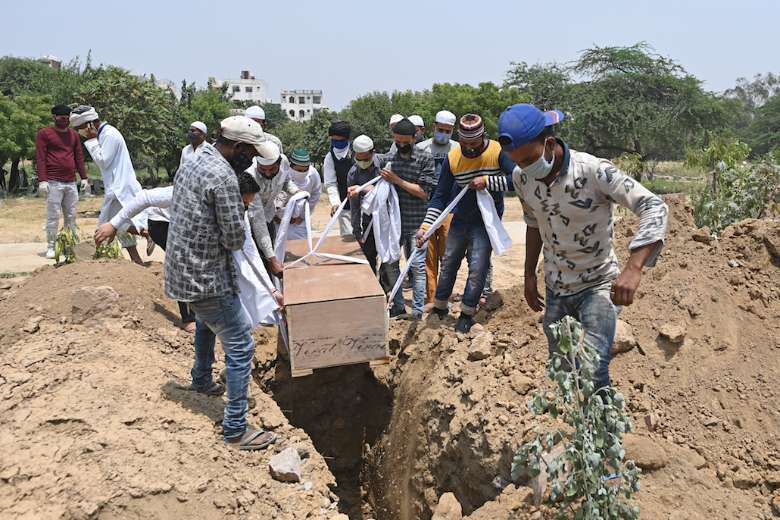 Relatives, friends and graveyard workers prepare to lower the body of a Covid-19 victim during a burial at a graveyard in New Delhi on April 28. (Photo: Aajjad Hussain/AFP)

The Mercy Angels, a 65-member team of volunteers in the Archdiocese of Bangalore in Karnataka state, help to bury Christians in the Indian Christian Cemetery, a common cemetery for all denominations in Bengaluru (formerly Bangalore).

“We have buried more than 250 bodies of Covid-19 patients in less than 15 days in our archdiocese,” said Father Santosh Royan.

On each day over the past fortnight, they have buried an average of 15 bodies.

“Just now we have done a burial,” volunteer Yohan Joe told UCA News on April 28. “Another 11 more bodies are waiting for burial. We will not leave this place until we bury them all.”

Father Royan said they do not discriminate against “anyone based on their denomination or anything like that. We bury each body with respect.”

“Our mission is to accord a dignified Christian burial to all those who die of Covid-19 infections as they cannot afford to get a dignified burial because of restrictions,” the priest told UCA News on April 28.

I feel sorry for the families of the dead, but at the same time I feel happy that I have been able to help them at this difficult time

The government has imposed strict protocols for burials such as trained personnel to handle bodies, protective gear for workers and sanitization of ambulances before and after carrying bodies.

Church officials say the poor cannot arrange money for the sudden expenses and may leave bodies in hospitals to be cremated in government facilities without any funeral prayers.

“We seek out those who cannot bury their dead. On average we get 15 and we bury them all before 11 at night,” Father Royan said.

Joe, a psychology graduate student, said the gravediggers start work as early as 4am and burials start around 10am as bodies arrive from 9.30am. “I feel sorry for the families of the dead, but at the same time I feel happy that I have been able to help them at this difficult time,” he said.

The archdiocese has made special provisions to meet such burial expenses, said Father Royan, adding that the cost of a protective kit alone comes to 3,000 rupees (US$40) for each burial.

Among the 250 burials so far, 25 were Hindus, while close to 100 were Catholics and the rest Christians from other denominations, the priest said.

Hindus are buried in the Christian cemetery because their families wanted it as they had no other place for burial. “We see no difference of religion or caste when it comes to disposing of bodies,” Father Royan said.

The volunteer team includes Muslim and Hindu members. However, the team has not buried a Muslim body so far because the Muslim community takes care of burials of the poor among them.

Anne Morris, a volunteer and a mother of two teenage children, said she seldom interacted with her children and other family members. “We keep a safe distance even in our families.”

I now believe only one thing is valuable in this world: helping each other

She has been part of the Mercy Angels since last year when the contagion broke out in India. Her team has been assisting the burial of pandemic patients since then.

“Mostly my children do the cooking and other household work and I dedicate the maximum of my time for this cause,” she told UCA News on April 29.

She and her children got infected with Covid-19 four times last year. “I feel blessed and God has specially me chosen for this mission,” she said.

J. Sahayaraj, another volunteer who runs his own business, said it was “God’s blessing that I was chosen for this mission.”

“We recently got three bodies with no one accompanying them. We collected them and buried them with full honors, offering prayers like in the case of others,” he said.

“I now believe only one thing is valuable in this world: helping each other. Money, power and other riches are not going to be of any major use.”