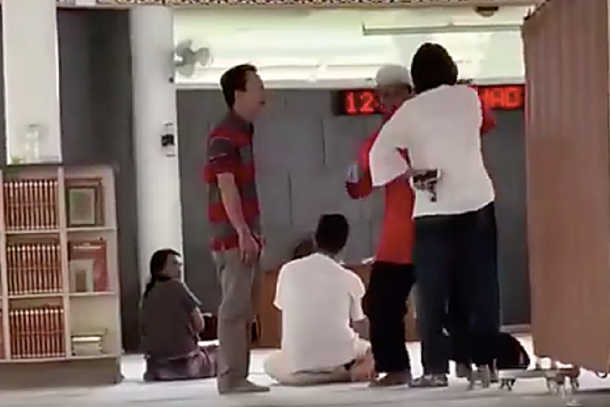 Suzethe Margaret, a Catholic woman with schizophrenia is seen here talking to Muslims in Al Munawaroh Mosque near Bogor. The 52 year old woman is facing a possible eight months in prison for blasphemy. (YouTube screengrab)

Prosecutors told judges during a hearing at the Cibinong District Court in Bogor, West Java on Dec. 17, that they are seeking the jail term for Suzethe Margaret for violating Article 156(a) of the Criminal Code that deals with blasphemy.

Margaret, a 52-year-old mother of four, was charged on July 1 after a blasphemy complaint was filed against her in late June after she stormed into a mosque with a dog, and while still wearing shoes, to look for her husband.

A video showing the incident went viral on social media and sparked anger among Muslims, who regard dogs as impure and who are strict about removing shoes before entering mosques.

“They failed to see the facts presented by almost all the witnesses during previous hearings that she is sick,” he said.

“Medical examinations have shown that she suffers from acute schizophrenia and doctors have recommended that she be treated in hospital,” he told ucanews.

He said he had records that Margaret was currently undergoing treatment for her condition.

“She is still an outpatient who must see a doctor at a hospital once a week,” he said, adding that she has suffered from schizophrenia since 2013.

He also said Margaret was hospitalized for several days two weeks before this week’s hearing.

“She suffered a relapse due to the stress of the hearings,” Kota said, who added she was left shocked when told prosecutors wanted her jailed for eight months.

The next hearing in her case is set for January, he said.

Andreas Harsono, an Indonesia researcher at the New York-based Human Rights Watch, said the case should not have reached court, citing Article 44 of Indonesia’s Criminal Code that stipulates that a person who commits a criminal act by reason of a mental health condition cannot be held criminally liable.

However, he said this has not stopped authorities from going after people with mental health issues in the past.

In March, a court in Serang, in western Java sentenced Aisyah Tusalamah, a woman who claimed to be a reincarnation of the mythological “Queen of the South Sea” to five months in prison for posting an allegedly blasphemous video on social media.