Girls join a 'body-mapping' activity at a residential girls' secondary school in Patratu, in the eastern state of Jharkhand. The school, Kasturba Gandhi Balika Aavasiya Vidyalaya, is run by the Indian government for underprivileged families. The girls were discussing menstruation as part of the Menstrual Health and Hygiene Management for Adolescents Girls project. (Photo courtesy of UNICEF India)

Millions of Indian women and girls remain ignorant about how to manage their monthly menstrual cycles in a safe and hygienic way, which can put their lives at risk.

Issues associated with menstruation are taboo in conservative Indian society and are not discussed openly, which endangers lives, said Meenakshi Gupta, co-founder of Goonj, an agency of volunteers that supplies sanitary pads and raises awareness about this issue in 23 of the country's 29 states.

In large swathes of rural India, as well as some urban pockets, females are considered impure and segregated when menstruating. They are forced to sleep in separate "menstruation huts," which are often cowsheds or barns, Gupta said.

Poverty and a general lack of awareness of health issues pushes them even closer to death as they are prone to infections while bleeding, or can be bitten by snakes or other wild animals in the huts, experts say.

In one village in Firozabad in the northern state of Uttar Pradesh, a woman died of tetanus recently because she used a blouse to stem the flow of blood that had a hook on it covered in rust, Gupta recalled.

A National Family Health Survey conducted from 2015-16 show that only 58 percent of women aged 15-24 use hygienic ways of dealing with their menstrual flows due to a lack of access to and awareness of sanitary napkins.

Many resort to using unwashed clothes, leaves, hay, or even sand to absorb the blood, often resulting in infections, Gupta said.

In a study of nearly 100,000 girls in the country, nearly half of the respondents said they didn't know what menstruation was until they personally experienced it for the first time.

Some thought they were dying or had a horrible disease, according to a UNICEF report.

German NGO Wash United created Menstrual Hygiene Day in 2014 to create awareness of the dangers associated with a lack of education about this issue. 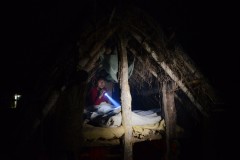 Women want India to do more to popularize sanitary pads

It chose May, the fifth month of the year, because most women menstruate on average for five days a month; it selected the 28th day of May because 28 days is the average length of the menstrual cycle.

Gupta said millions of women — especially migrant workers, sex workers, homeless women, tribal women, and women with disabilities — lack access to sanitary pads or tampons while also struggling due to an absence of private spaces in which to deal with their periods with dignity.

"These challenges go beyond the issue of sanitary napkins," she said. Panelists discuss issues related to female menstruation at a recent conference in New Delhi sponsored by UNICEF, USAID and Netflix following a screening of the Oscar-winning documentary 'Period. End of Sentence.' Seated from left: US embassy official Amit Shah, WASH specialist Prabhakar Sinha, Poonam Muttreja of the Population Foundation of India, Prabha Murti from the Mahati Trust, and Ameet Pai, general manager of marketing for Johnson & Johnson in India. (Photo by Rita Joseph/ucanews.com)

The stigma of "impurity" restricts women and girls who are menstruating from engaging in activities such as cooking, eating certain foods, sleeping on beds, going outside the house, or participating in religious practices.

According to a study by Nielsen and Plan India, of the 355 million females who are of a menstruating age in the country, only 12 percent use sanitary napkins.

Published studies in 2014 show that nearly 23 million girls drop out of school each year when they begin to menstruate due to a lack of hygienic facilities and a poor awareness of menstruation in general.

On a more positive note, southern Kerala has recently become the first state in India to make vending machines that dispense sanitary pads mandatory in all higher secondary schools, effective from the next academic term.

Poor menstrual hygiene can lead to a range of troubling issues, including fungal, bacterial, reproductive and urinary tract infections, as well as infertility, said gynecologist Megha Panwar in New Delhi.

According to the World Health Organization (WHO), India accounts for 27 percent of the world's cervical cancer deaths, almost twice the global average. Poor menstrual hygiene is cited as a major cause.

Another dangerous trend that is gaining ground is the removal of the uterus to avoid menstrual discomfort, said Gupta.

She said some employers loan money to daily-wage workers so they can have a hysterectomy to ensure their work is not interrupted by normal biological processes, let alone pregnancy.

Some women with disabilities who find menstruation a challenge prefer to have their uterus removed, Gupta said.

Of the 18 million differently-abled women in India, 22 percent below the age of 35 have had their uterus surgically removed, according to a 2016 report by the Ministry of Statistics and Program Implementation.

The federal government has launched several awareness programs to combat these issues, said Parameswaran Iyer, secretary of the Ministry of Drinking Water and Sanitation.

He said popular films have been instrumental in promoting dialogue about menstruation and bringing these issues out into the open, particularly the Oscar-winning documentary, "Period. End of Sentence."

"Menstruation should be treated as a human issue, not just a women's issue. Men must also be made more aware about menstruation and how it affects women, both physically and emotionally," the nun said.