Fishermen say their stocks have dwindled to a few kilograms, forcing them to migrate, while crop harvests have also suffered It said lower rainfall, flow changes upstream, hydropower operations in the Mekong tributaries and outflow restrictions from the Jinghong Dam in China’s Yunnan province were responsible for the fall.

“There have been sudden rises and falls in water levels immediately downstream of Jinghong and further down to Vientiane, which has been challenging for authorities and communities to prepare for and respond to possible impacts,” Winai Wangpimool, director of the MRC Secretariat’s technical support division, said on Feb. 12.

About 70 million people live near the Mekong River and many depend on it for their livelihoods.

MRC monthly rainfall observations showed that since November last year rainfall had been consistently lower than average, falling by 25 percent, and that low water levels stretched from China to the river delta in Vietnam.

Water level data also indicated that outflow at the Jinghong station in China on Feb. 11 was 775 cubic meters per second, a plunge of almost half of its normal level, the MRC added.

People around the Mekong River, who live hand to mouth, have endured more than two years of drought blamed largely on climate change and exacerbated by the construction of dams in China and Laos.

Fishermen say their stocks have dwindled to a miserable few kilograms, forcing them to migrate, while crop harvests have also suffered. All five Lower Mekong countries are run by authoritarian, military-backed regimes.

The MRC noted that last year China agreed to share year-round water level and rainfall data with the MRC and member countries — Vietnam, Cambodia, Laos, Thailand and Myanmar — about any abnormal rise or fall in water levels or discharge.

This was particularly relevant in regard to information on factors that might lead to sudden flooding in the world’s 12th largest river, which has persistently struck record lows over the past two years. 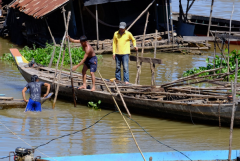 “Continuing this flow pattern could have an impact on river transport, fish migration, agriculture and river weed collection,” Winai said.

Low water levels have also led to a lack of sediment downstream, needed to replenish banks. The MRC said this had led to parts of the river acquiring an aquamarine color, a phenomenon that last occurred in late 2019.

The MRC Secretariat’s chief environment management officer, So Nam, said the potential impact of higher water clarity included changes in the productivity of the river, with less food available for aquatic insects, invertebrates and small fish.

“This will in turn affect the productivity of aquatic biodiversity, reducing fish catches and threatening the livelihoods of local communities,” he said.

Nam added that the Mekong’s blue-green appearance could persist until flows increase with the onset of the next flood season, which usually begins in late May.

“Normal conditions may be restored if large volumes of water are released from storage reservoirs in the Upper Mekong dams and tributary dams, which would mobilize sediments and return the Mekong to its typically brown appearance.”