Mekong fishing and farming families get some relief 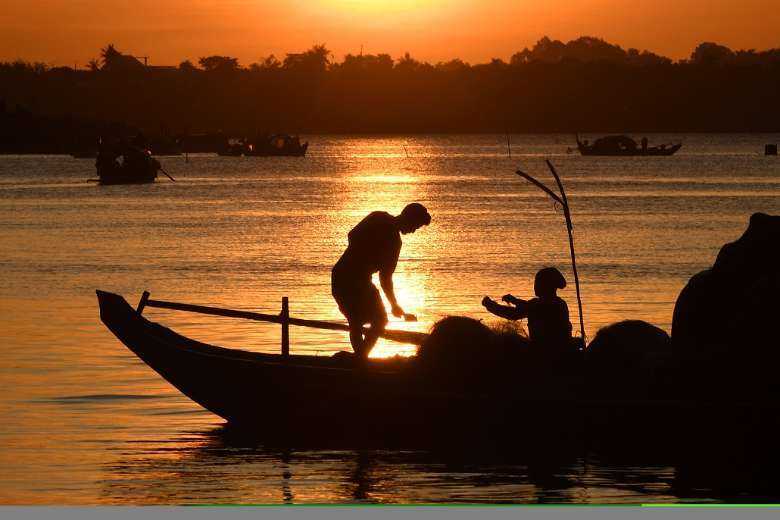 Fishermen sort out a net on a fishing boat in the Mekong River in Phnom Penh, Cambodia on June 28, 2021. (Photo: AFP)

Heavy rains and China’s decision to release more water from upstream dams have offered a glimmer of good news for fishing and farming families who have suffered from poor catches and harvests amid a four-year drought.

The Mekong River Commission (MRC) said the first four months of 2022 had been the wettest in several years while monitoring stations show water in the Mekong during March and April had routinely exceeded levels recorded last year indicating dam release.

“These two factors combine to unleash greater flows of sediment and nutrients, which ought to boost fish supply, bolster agriculture and benefit some 70 million people who dwell in these riverine communities,” the MRC said in a statement.

Specifically soil moisture — required for farmers to grow and harvest crops — showed significant improvement over 2020 and 2021 with rainfall 25 percent higher in the Lower Mekong Basin over the corresponding November to April period.

However, it said this positive development might be fleeting as July could bring more drought to parts of the basin, according to recent forecasting.

“This gives us hope that the Mekong is recovering and replenishing,” Winai Wangpimool, director of the MRC Technical Support Division, said.

“Nevertheless, this doesn’t eliminate the risk of moderate drought,” he said, adding MRC figures showed water levels across the basin remained well below the 60-year average from 1961 to 2021 — and beneath the most recent decade of healthy flow, from 2008 to 2017.

Climate change, in part, and water hoarding by China and Laos through a massive network of more than 100 dams, have been blamed for exacerbating the impact of the drought. That includes a lack of water and dirty water supplies in cities like Phnom Penh.

The MRC — which manages water resources in Cambodia, Laos, Thailand and Vietnam — also said the traditional wet season had shortened from five months to four, from June to October to July to October.

“That’s what makes this replenishment of water so important. Of course, more precipitation also brings the risk of torrential rain and flash flooding — and danger to lives and property.”

It also said China was providing dry-seasonal data, in addition to its wet-season data, from the Jinghong monitoring station which had improved the information flow regarding the river.

The MRC has consistently reminded Mekong countries of the urgent need to address the issues facing the river where at least 65 million people live hand to mouth and rely on Southeast Asia’s largest river as their chief source of protein.