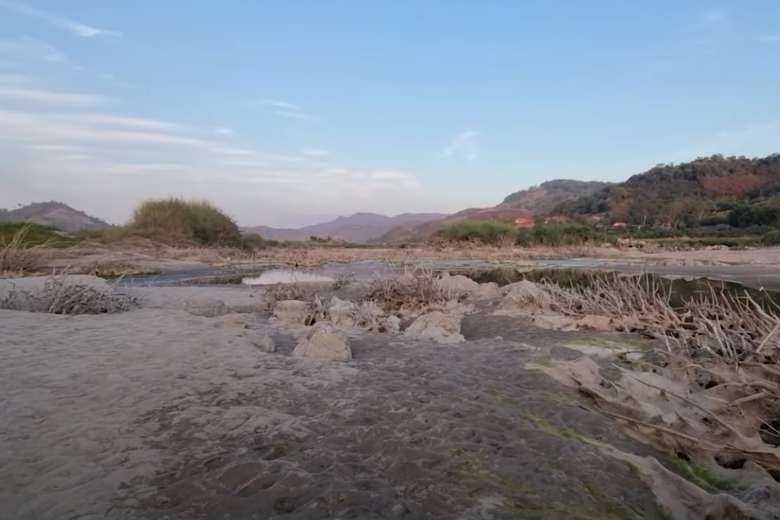 The water level is frequently so low that locals can wade across the Mekong River from shore to shore. (Photo: YouTube)

A cascade of hydroelectric dams on the Mekong has caused water levels in the river on which millions depend for sustenance to plunge to catastrophically low levels, according to experts and news reports.

The upriver dams, which are owned by China and Laos, hoard water in their reservoirs, leading to a shortage of river water downstream during the current dry season.

In many places during a long stretch of the river between Laos and Thailand, the water level is frequently so low that locals can wade across it from shore to shore.

At the same time, the quantity of available water is not enough for fishing or irrigation, which has left many fishermen and subsistence farmers in the area high and dry.

“The Mekong River is dry because of the dams,” a Thai villager in the northeastern province of Loei, bordering Laos across the river, was quoted as saying.

“The more dams we have, the drier the river will become. Nobody is trying to compensate us and mitigate the problem.”

There is an oversupply, so why do they still want to build dams? Nobody knows because there is no oversight

The water level in the Mekong has been among the lowest ever on record for three years straight, according to the US-based Stimson Center’s Mekong Dam Monitor project.

In a development that has alarmed both environmentalists and people living along the river, Laos is planning to construct even more large hydroelectric dams, which will deal a further blow to the Mekong.

Experts have questioned the economic feasibility of the planned new dams, saying that there is an oversupply of electricity from Laos to Thailand with Laos’ recently launched Xayaburi Dam, a 1,285-megawatt construction financed by a Thai company, and several other dams already in operation.

“There is an oversupply, so why do they still want to build dams? Nobody knows because there is no oversight,” said Pianporn Deetes, campaign director at the environmental group International Rivers.

Some activists have said that the construction of the dams could be an income-generating scheme for Lao officials and their Thai partners.

The more than a dozen large dams already in operation upstream in China and Laos have frequently caused acute shortages of water in countries downstream such as Thailand, Laos, Cambodia and Vietnam.

The situation is especially acute right now because of a prolonged drought during the dry season, locals say.

During the rainy season, meanwhile, floods downstream are triggered by massive amounts of water released from reservoirs in China.

“The Mekong River is not the same. Sometimes [its level] is low, and sometimes it is high,” said a Lao fisherman who lives on the bank of the Mekong in Xayaburi province.

“I can catch more fish in the Xayaburi Dam reservoir than I can in the area below the dam.”

Should any more dams be built, the Mighty Mekong, which provides tens of millions of people with their livelihoods in several nations, might become a shadow of its former self, locals say.

“There will be no more fish at all. I don’t want any more dams on the river,” a Lao fisherman said.