A young girl runs through Chong Khneas Floating Village, now on the bed of the Tonle Sap, a Cambodian lake which is running dry after a three-year drought. (Photo: Luke Hunt)

The Greater Mekong Subregion (GMS) has endorsed a 10-year strategy to combat threats ranging from the Covid-19 pandemic to climate change and has also earmarked an initial US$3.1 billion worth of priority projects designed to alleviate poverty and promote growth.

The projects are backed by the Asian Development Bank (ADB), which said the pandemic has pushed eight million more people in GMS countries into poverty, adding that more than 340,000 migrant workers have been forced to return home.

“The ADB’s near-term priority is to help economies recover from the Covid-19 pandemic. In parallel, our assistance will pave the way for inclusive, sustainable and resilient development in the long term,” ADB president Masatsugu Asakawa said.

With a combined population of 326 million, the GSM consists of Cambodia, Laos, Myanmar, Thailand, Vietnam and two Chinese provinces which are also bound by the Mekong River.

The region has been hit hard by the pandemic and a three-year drought which has resulted in the Mekong striking record lows, depleting fish catches and upsetting farm production.

Dam construction in China and Laos combined with climate change have been widely blamed for exacerbating the plight of the longest river in Southeast Asia.

Sand dredging, illegal logging and overfishing have also taken a heavy toll that has analysts predicting the Mekong will emerge as the region’s next flashpoint after the dispute in the South China Sea.

US Secretary of State Antony Blinken this month called for “a free and open Mekong” amid accusations that China is deliberately hoarding water upstream.

However, Deng Xijun, Chinese ambassador to ASEAN, hit back at the US and “other countries outside the region” during the summit, accusing Washington of attempting to build exclusive blocs within the region.

“High on their agenda is to hype up the so-called water resources issue with their true intention to sow discord and turn the Mekong subregion into a theatre of geopolitical rivalry — the front line of the containment of China,” he wrote after the summit. 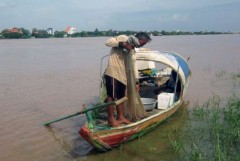 The ADB said the 2021–23 GMS Covid–19 Response and Recovery Plan would address the health, economic and social impacts of the pandemic through regional cooperation in key areas.

This includes measures to protect the health of people, animals, crops and food products, as well as urban environments, and it forms part of the GMS 2030 strategy.

“It also seeks to promote the safe, orderly movement of labor and support open borders as well as inclusive, green and resilient economic activities. An initial list of priority projects worth $3.1 billion has been identified to support the plan,” the ADB said in a statement.

The strategy was released at the 7th GMS Leaders’ Summit hosted by Cambodia this week and covered other issues including trade barriers and rapid urbanization.

“Critical trends that threaten its continued success into the future have been gaining prominence, particularly in the last decade, including those pertaining to global economic growth and trade, the environment, disease and technology,” the GSM said in a separate joint communique.