Professor Guzman Carriquiry has spoken without mincing his words on the state of Christianity in America. 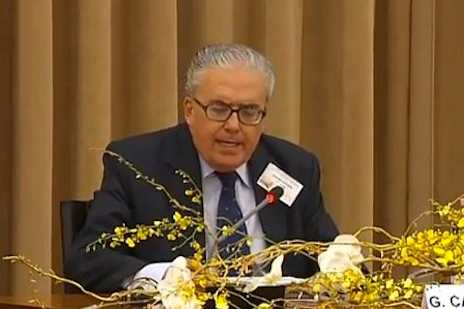 An official for the Vatican's Latin America commission has warned against a “gray pragmatism and mediocrity” that he believes has infiltrated Christianity in America.

Professor Guzman Carriquiry, secretary for the Pontifical Commission for Latin America, made his remarks on Dec. 8, the first day of the International Congress Ecclesial in America taking place at the Vatican's Synod Hall.  During his speech, Carriquiry noted a growing tendency among Americans to live the faith with a lack of enthusiasm, lukewarmness and ignorance.

“How many Christians today have buried their baptism under a cloak of consumerism and indifference,” he said.    “How many devotions are practiced without an authentic encounter with Christ in the sacraments,” he said, lamenting “the abandonment of confession” among local Catholics and “superficiality in participation at Mass.”

Despite this, however, Blessed John Paul II's document “Ecclesia in America” has pointed to “the example of numerous saints, heroes, champions of charity and martyrs,” he added, “in order to remind us of the path we Christians of America today must walk in the Third Millennium.”

Carriquiry underscored that encountering Christ requires a radical renewal of catechesis, “which needs to be presented in all of its grandeur, because there is grave ignorance of our faith, especially in the new generations.”

“We are experiencing this crisis of authentic Catholic formation which can be seen in all Christians but especially in those who have the greatest influence in our society.”  “For this reason,” he said, “we need to completely re-think the Christian formation of the faithful, whether for initiation or re-initiation, in order to achieve a growing and solid formation of mature persons in the faith.”

The fundamental reference for this process, the professor noted, “must be the Catechism of the Catholic Church, which Pope Benedict XVI has put front and center in this Year of Faith.”