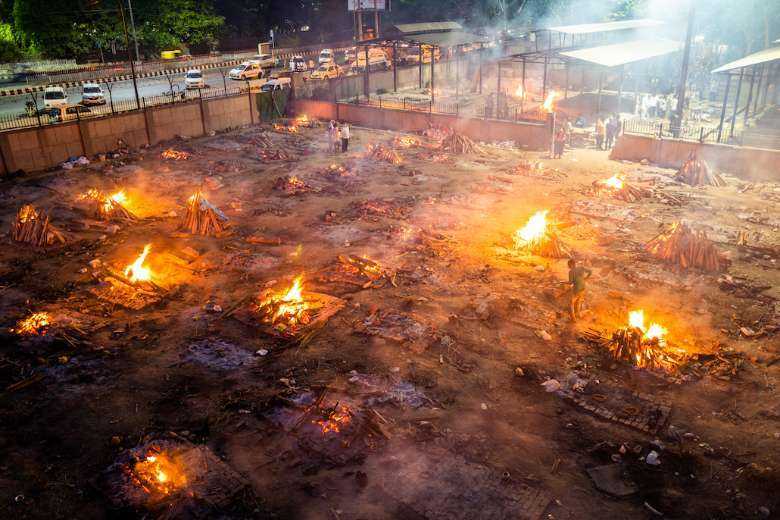 The burning pyres of Covid-19 victims at a cremation ground in New Delhi on April 26. (Photo: Jewel Samad/AFP)

Cardinal George Alencherry has urged India’s government to consider medical oxygen as a basic human right as the country faces an unprecedented shortage of the life-saving gas, causing the deaths of hundreds of Covid-19 patients.

“Treat the availability of medical oxygen as a basic human right and take all necessary measures immediately to make it available to the people who are struggling hard to hang on to their lives in hospitals and healthcare centers,” he said in an appeal to the federal government.

Cardinal Alencherry’s call came after both government and private hospitals in national capital New Delhi and other states turned away critically ill Covid-19 patients who required oxygen support to sustain their lives.

Since early April, hospitals in many cities and towns of India have been reporting a lack of beds and oxygen to assist hundreds of patients as pandemic cases began to spiral out of control.

The second wave of the pandemic has wreaked havoc, exhausting all medical facilities in the country and forcing people to die even inside hospitals for want of oxygen.

As India began to add more than 300,000 new coronavirus cases each day for the past week, many are also dying in their homes unable to get a bed or medical treatment in a hospital.

Social media has horrific images of people dying in ambulances in front of hospitals without oxygen and medical care, exposing the collapse of medical infrastructure.

Cardinal Alencherry wants the federal and state governments to declare medical oxygen a human right as its black marketing and exorbitant prices have taken a great toll on the poor.

“We usually speak of food, clothing and shelter as basic human needs that a government should provide for its people. Now, with the increasing spread of Covid-19, the lives of the people are in extreme danger and there is a great clamor for medical oxygen for survival,” the cardinal said on April 25.

Cardinal Alencherry, head of the Eastern-rite Syro-Malabar Catholic Church and president of Kerala Catholic Bishops’ Council, said medical oxygen “should be treated on a par with food, clothing and shelter.”

“It is the bounden duty of the government to make available medical oxygen in all the hospitals and healthcare centers of India,” Cardinal Alencherry said.

“There are many who cannot afford to buy medical oxygen from the open market because of exorbitant prices. What is important is that, at this critical juncture in our country, it should be made available to all our citizens.

Cardinal Alencherry also urged the government to use all its resources like chartered flights to bring medical oxygen from abroad.

If all deaths were counted, it would be way beyond our imagination

A senior government official in central India told UCA News that the death toll “is just the tip of an iceberg. It is only the count of those who died in government hospitals after testing positive.”

He added: “The toll does not include those who die in their homes and private hospitals. Also, people dying without tests and medical care in villages are not even considered. If all deaths were counted, it would be way beyond our imagination.”