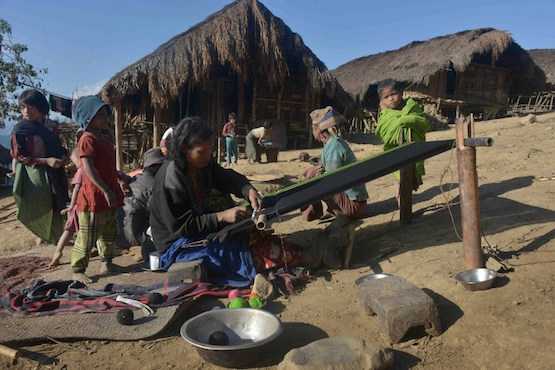 In this photograph taken on Dec. 24, 2014 show a Naga woman weaving cloth in the remote Sagaing region of Myanmar nearly two years before the town and nearby areas were hit by a measles-like outbreak. (Photo by AFP)

At least 38 people, mostly children, have died from a measles-like outbreak in the remote and mountainous Naga region of northwestern Myanmar that has had little exposure to vaccination programs.

A team of five medical specialists are visiting the affected areas and are cooperating with local health workers, said Lucas Thet Naung, a Catholic Lower House lawmaker for the ruling National League for Democracy in Lahel constituency of the Naga region.

"Challenges in communication and the region’s weakness of healthcare provisions are the main reasons for the outbreak," Thet Naung told ucanews.com, adding that the outbreak had been around since June.

Around 200 people have reported suffering the symptoms in at least five villages in the Naga region, a largely Christian-populated area in Sagaing Division on the border with India.

The Catholic lawmaker explains that there is only one medical doctor and 26 healthcare workers among the 97 villages in his constituency of Lahel township.

The government’s measles vaccination program had not been carried out in most of the Naga region according to Thet Naung.

Doctor Than Tun Aung, deputy director-general of Department of Public Health, said: "This is not an epidemic and it is an outbreak with measles-like symptoms."

Than Tun Aung said that they are still waiting for blood test results.

"Some children from the Naga region were missed from the nationwide vaccination program in 2015 due to transportation challenges and there being few healthcare workers in the remote region," said Than Tun Aung.

"The nutritional status in an impoverished region such as Naga is could also a factor for the outbreak," he said.

Measles outbreak was occurred in the Naga region in 2011 but Than Tun Aung could not say how many died on that occasion.

Around 120,000 people live in the Naga region where many of its communities, a conglomeration of several tribes, inhabit the northeastern part of India and northwestern Myanmar. They survive mainly through subsistence farming and hunting.

More than 90 percent of the Naga people identify as Christians, mostly Baptists as a result of American missionary work in the 19th century.

Myanmar is still one of the lowest spenders on healthcare in the world.