Started by the Oblates, the institution aims to educate youth in Youhanabad, the largest Christian area of Lahore city 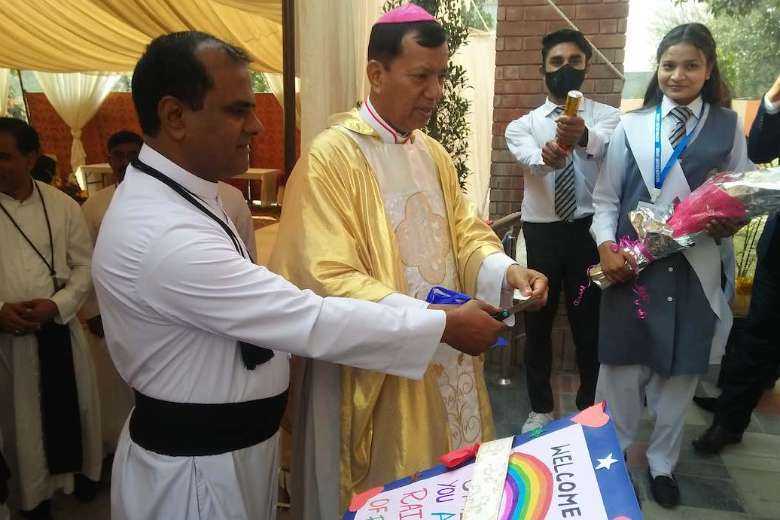 Archbishop Sebastian Francis Shaw of Lahore cuts a ribbon at the entrance to Mazenod College in Lahore after the blessing and opening of the building on Feb. 16. (Photo supplied)

It was a long-awaited dream for the Oblate Missionaries of Mary Immaculate (OMI) in Pakistan to educate the underprivileged youth to better serve their homeland.

In keeping with the traditions set by their founder St. Eugene de Mazenod, the Oblates were working in faraway places where others hesitate to go, such as the mountainous and desert areas of Baluchistan and Punjab.

But the need for a new institution in an urban area was felt after seeing the difficulties faced by poor families to educate their children in Youhanabad, the biggest residential colony of Catholics in Lahore city.

The Oblates thus started Mazenod College with the slogan "Where your dreams come true," fulfilling a promise to provide higher secondary education to the underprivileged youth in Lahore and its neighborhood.

Archbishop Sebastian Francis Shaw of Lahore blessed the new initiative launched in the name of the founder on Feb. 16, the day OMIs in Pakistan started the golden jubilee year of their missionary services in the South Asian country.

“We are privileged to have OMIs of different nationalities serve Pakistan in the past 50 years. I congratulate them on their golden jubilee and this initiative taken for the youth,” said Archbishop Shaw, appreciating their remarkable contributions.

“We aim to reach out to more young people, especially Christians and others irrespective of their caste or creed, offering quality education to prepare them for university studies”

Mazenod College is the second Catholic institution imparting higher education in Youhanabad, which comes under the Archdiocese of Lahore and has some 200,000 Christians.

“We praise and thank God that in the first year we were able to admit more than 160 students,” said Father Khan Paulus, the delegation superior of the OMIs in Pakistan.

“We aim to reach out to more young people, especially Christians and others irrespective of their caste or creed, offering quality education to prepare them for university studies.”

Mazenod College is also looking to admit students from mission areas outside Lahore and has initially arranged accommodation for 10 Christian girls with the help of the Charity Sisters of St. Janneth.

“We are also looking for a place for the boys to stay and are hoping to attract more students from the rural missions in the next academic year,” said Father Paulus.

College principal Shakeel Earnest said they were offering students the best faculty alongside classrooms, a library and laboratory facilities of international standards. “Eighty percent of our students are studying on scholarship. With the help of the Oblates, we are truly on a mission to support the poor and needy.”

Zakai Ashraf, one of the students, said he and his companions now had a college closer to home and weren’t required to travel long distances.

Another student, Abnar Javed, said Mazenod College was the only institution in town with digital facilities. “We are getting quality education here along with our moral and ethical formation,” he said.

Father Paulus said it was their mission to help young Christian men and women to learn and grow in Catholic values and work for the development of their homeland Pakistan.

The OMIs started their mission in Pakistan on Feb. 14, 1971, in the Diocese of Faisalabad (then Lyallpur) at the invitation of the then Bishop Benedict Cialeo (OP) to the OMIs' provincial in Sri Lanka.

The pioneering OMIs came from Sri Lanka and were later joined by their counterparts from Canada, Indonesia, Poland, Bangladesh and Austria.

The Oblates in Pakistan have worked in all the dioceses of Pakistan, taking on the most difficult missions, including in Derrickabad in the Thal desert and Baluchistan, a dry desert and mountainous geographic province bordering Iran, Afghanistan and the Arabian Sea.

During their 50 years of service, the Oblates have embarked on parochial ministry, education ministry, youth mission, Justice, Peace and Integrity of Creation (JPIC) ministry and formation ministry with special people besides promoting Marian devotion.