In their latest judicial action, authorities have charged Thanathorn Jungroongruangkit with royal defamation Thanathorn Juangroongruangkit, founder of the now-dissolved Future Forward Party, gestures during a press conference in Bangkok on Jan. 21, after he was accused of contravening strict royal defamation laws by posting a video criticizing the government's Covid-19 vaccine strategy. (Photo: AFP)

A prominent Thai pro-democracy campaigner and opposition politician has accused the government of carrying on with a long-running vendetta against him in order to sideline and silence him.

In their latest judicial action against Thanathorn Jungroongruangkit, a progressive politician who founded the widely popular but now defunct Future Forward Party, authorities have charged the charismatic activist with royal defamation over his comments regarding a royally sponsored vaccination project.

In a live discussion on Facebook this week, Thanathorn raised questions about issues of transparency regarding a new company established under the Crown Property Bureau that has been given the go-ahead by the government to handle vaccination of Thais during the ongoing Covid-19 pandemic.

In response, Suporn Atthawong, a minister in Prime Minister Prayut Chan-o-cha’s office, accused Thanathorn of defaming the monarchy and has filed a defamation suit with police.

If convicted, Thanathorn could face years in prison as royal defamation is a crime punishable with up to 15 years in jail. Any conviction carries a minimum of three years in prison.

Prayut, a former army chief who seized power in a coup in May 2014, has likewise warned the outspoken opposition politician of legal implications for questioning the integrity of the government-sponsored and palace-allied vaccination project.

Thanathorn, who is already facing other criminal charges such as sedition over his political activism, appears to have remained untroubled by the threat.

“The more you try to discredit me or harass me with charges, the more it makes you look suspicious,” the politician, 42, said in a Facebook post. 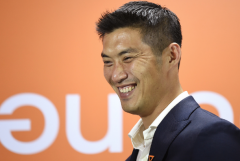 “Why does the state have to go to these lengths to defend a private company?” he added.

Thanathorn himself has been banned from politics for 10 years along with several other leaders of the party.

“Today’s decision by the Constitutional Court to dissolve the Future Forward Party illustrates how the authorities use judicial processes to intimidate, harass and target political opposition,” rights group Amnesty International said at the time.

“The dissolution of the Future Forward Party is the culmination of the Thai authorities’ relentless onslaught against the party’s leaders and members since the lead-up to the March 2019 general elections.”

The party’s disbandment served as a rallying cry for young pro-democracy activists who began staging anti-government mass rallies throughout last year in Bangkok and elsewhere.

The leaders of these grassroots protests, most of whom are high school and college students, have been demanding sweeping political reforms and have called on Prayut to step down.

The authorities have countered the protesters’ demands by prohibiting rallies and charging dozens of young pro-democracy activists with serious crimes such as sedition and royal defamation.

Rights activists have denounced the government for its continued crackdown on pro-democracy voices.

“[They] are using lese majeste prosecutions as their last resort in response to the youth-led democracy uprising that seeks to curb the king’s powers and keep him within the bounds of constitutional rule,” said Sunai Phasuk, a researcher at Human Rights Watch.