Reopening comes after no new Covid-19 cases reported in two weeks, but state of emergency is extended People attend the first Mass at St. Joseph Church in Dili on May 28 after the Timor-Leste bishops' conference and the government allowed churches to resume activities. (Thomas Ora/UCA News)

Timor-Leste has officially reopened churches for daily and weekly Eucharistic celebrations after the predominantly Catholic country’s Covid-19 task force reported no new coronavirus cases in the past two weeks.

The decision by the country's bishops was announced on May 28, two months after churches were ordered closed when the first Covid-19 case was recorded in March."Churches are open only for Masses," the bishops said in a statement signed by Archbishop Virgílio do Carmo da Silva of Dili, Bishop Norberto do Amaral of Maliana and Bishop Basílio do Nasscimento of Baucau.
Subscribe to your daily free newsletter from UCA News
Thank you. You are now signed up to Daily newsletter
People wanting to attend daily or Sunday Masses have been urged to keep following health protocols."People must wear masks during celebrations," the bishops said. "Parish priests and parish councils must ensure the faithful wash their hands and keep their distance inside churches."Timor-Leste has recorded only 24 positive cases and no deaths. Despite not recording any new cases in the last two weeks, the government has extended its state of emergency to June 26. It had been due to expire on May 28."The government felt the need to extend the state of emergency given the global pandemic is not over," Prime Minister Taur Matan Ruak said on May 27.

He said there would be an easing of restrictions, with businesses being allowed to reopen and churches and schools resuming activities.

He also said the country’s emergency response was meant to anticipate the growing number of Covid-19 cases in neighboring Indonesia, particularly in border areas in West Timor.

According to President Francisco Guterres Lú-Olo, the decision to extend the state of emergency was agreed by MPs. This would involve, among other things, tightening controls at the country’s land, sea, and air borders.

“People must also give their full cooperation throughout the emergency period,” Lú-Olo said. "Citizens must remain disciplined in following health protocols, such as wearing masks and avoiding crowds and maintaining a physical distance."

Father Emanuel Lelo Talok, the parish priest at St. Joseph Church in Dili who celebrated the first Mass on May 28, said he was very happy to see his parishioners again.
Related News 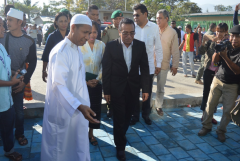 "Let's thank God for his blessings and for saving us from the ups and downs during the coronavirus epidemic that is still sweeping the world today," Father Talok told the congregation of about 300. "We pray in the light of Christ's resurrection that the pandemic will end soon." Speaking to UCA News, Father Talok said his parish would only conduct activities sanctioned by the bishops. "At present, we only offer Mass according to the existing rules. Other celebrations will be decided upon later,” he said.He said to avoid overcrowding in the church, participants would be limited to 500 for Sunday Masses and 200 for daily celebrations. "The parish is also laying on handwashing facilities for worshipers,” he said.Domingos da Costa, who has been observing lockdown restrictions by staying at home in Viqueque district, west of Dili, welcomed the resumption of Masses. "I feel alive again," he said.
Support our Catholic journalism with a contribution of any size
Your contribution will help the Catholic journalists and editors in UCA News to report news, features, commentaries, video stories and podcasts on issues affecting the lives of millions of Catholics around the world.
Here is a gift of two valuable books as a token of appreciation to you.
Check your mailbox for links to these PDF/e-Books.