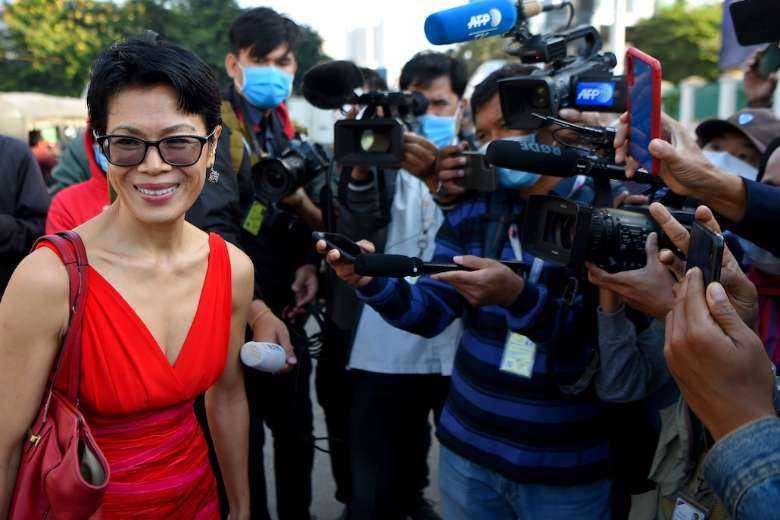 Cambodian-American human rights advocate Theary Seng smiles as she walks in front of Phnom Penh Municipal Court on Jan. 14 during a mass trial of more than 100 opposition members and activists charged with conspiracy to commit treason. (Photo: AFP)

The mass trial of Cambodian dissidents continued on Jan. 14 with 61 supporters of the banned political opposition facing Phnom Penh Municipal Court amid calls for support from the international community.

Only registered journalists were allowed inside the courthouse while others were denied entry by officials who said the number of people inside had to be cut due to social distancing regulations imposed because of the Covid-19 pandemic.

Much of the hearing was procedural but also focused on which people belonged to which Facebook group.

Outside the court security was tight amid a heavy police presence as a prison van filled with detained supporters of the Cambodian National Rescue Party (CNRP) arrived and filed out dressed in prison orange jump suits and manacled.

They face up to 12 years behind bars if convicted of treason and incitement charges.

Among the supporters was Prun Chantha, who scuffled with police after holding up a photograph of her husband Kak Khomphea. She said he had been held in pre-trial detention since last May, adding: “I want him to come home.”

More than 100 members of Cambodia’s banned opposition are before the court following a round of arrests that followed a 2019 failed attempt by CNRP leader-in-exile Sam Rainsy to return home and stage a popular rebellion aimed at unseating Prime Minister Hun Sen.

Further court hearings were held over the Christmas/New Year holiday, including charges made against a retired Australian politician in absentia.

Prominent pro-democracy advocate Theary Seng, whose work includes editing the Khmer version of the Bible, was before the court on Jan. 14. She said the trial should be viewed through the lens of politics, not a judicial one.

“I have been forced to enter a legal drama in a political theatre. The scene is a courtroom, the plot is against democracy. The others charged and I are being persecuted for our adherence to democracy, for the exercising of our democratic rights,” she said.

The CNRP went tantalizingly close to winning the popular vote at elections in 2013. Sam Rainsy refused to accept the result and alleged widespread rigging. Violent protests followed that led to a broad government crackdown.

Phil Robertson, deputy Asia director for Human Rights Watch, said Hun Sen had used the excuse of the Covid-19 pandemic “as a golden opportunity to ramp up the harassment against the opposition.”

“Foreign governments, UN agencies and donors need to finally speak up publicly and hold Hun Sen accountable for his crackdown on political opponents, the media and civil society before further irreversible damage is done,” he said.

These hearings were adjourned until Jan. 28. But a further trial will get underway tasked with prosecuting senior figures within the CNRP, largely in absentia. They include Sam Rainsy and former lawmaker Mu Sochua.

Both have said they will return to Cambodia to answer charges of treason and incitement, but the government has said it will not issue them with the necessary visas.

“Beyond expressed concerns and monitoring of these gross violations of human rights, the world community must together condemn it strongly accompanied with joint swift and serious actions,” Mu Sochua said on her Twitter feed.