Protests were also held in 29 cities of 12 countries, including Australia, Canada, the UK and the US 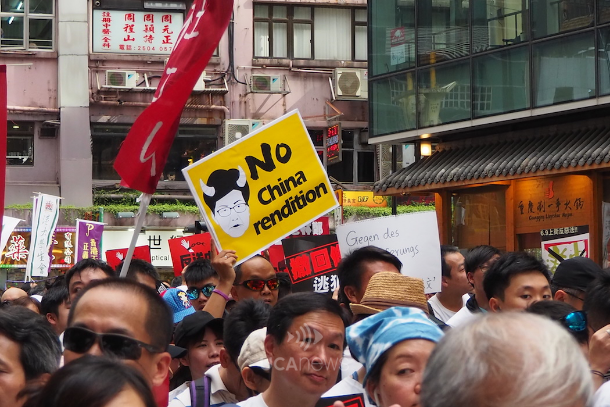 Protestors in Hong Kong have called for Chief Executive Carrie Lam to step down and for a looming extradition bill to be scrapped. (Photo by ucanews.com)

The Hong Kong administration has ignored a mass protest by locals opposed to a law allowing extraditions to Mainland China.

The Civil Human Rights Front estimated that more than one million people joined the June 9 rally.

However, police claimed that only about 150,000 people marched.

Nonetheless, it is one of the largest demonstrations since Hong Kong was handed back by Britain to China in 1997.

The first group of protesters started to march from Victoria Park to the Legislative Council building at around 2 p.m. and the last group left the park at round 8 p.m.

They were holding banners with slogans such as "Step down Carrie Lam", a reference to the Chief Executive of Hong Kong.

Six lanes of the main road were opened for protesters and trains did not stop at major stations along the protest route because the transportation system was over loaded.

Organizers announced that the protest had been ended at 10 p.m. but three local groups called on people to stay outside at Legislative Council building until June 12. Some protesters confronted police and tried to break into the building at around 12 a.m.

The Hong Kong administration released a statement at 11 p.m. noting that apart from some obstructions to traffic, the march, though large, was generally peaceful and orderly.

The statement reaffirmed that officials will continue to explain an amendment to an extradition ordinance that would allow the government to send fugitives to China and Taiwan, on a case-by-case basis, to face trial. Biddy Kwok, president of the Justice and Peace Commission of Hong Kong (JPC) noted that the amendment is selling Hong Kong people's personal safety out to the Chinese government.

"Hong Kong people expressed their will to the government clear enough already that they don't want the amendment," Kwok told ucanews.com.

She accused the government of disrespectfully ignoring the demands of the more than one million protesters.

Before the rally started, nearly a thousand Christians participated in a prayer meeting organized by the JPC and several other Christian groups.

Father Jacob Kwok Wai-ki, from the Hong Kong Diocese, noted that Christians in Hong Kong involved in ministry for the Church in Mainland China could be sent back to the Mainland for trial by China's communist government.

Father Kwok told the crowd that the Chinese government could concoct criminal changes but the protest by Hong Kong people showed that they would continue to speak out for justice.

Reverend Wu Chi Wai, a Christian pastor, pointed out that Christians have a duty to correct the government when it seeks to do something that is wrong.

Reverend Wu told the gathering that Beijing had stated clearly Hong Kong people considered harmful to national security would be sent back to Mainland China for trial before judges who are not independent but serve the regime.

Meanwhile, protests against the extradition changes were held in 29 cities of 12 countries, including Australia, Canada, the United Kingdom and the United States.