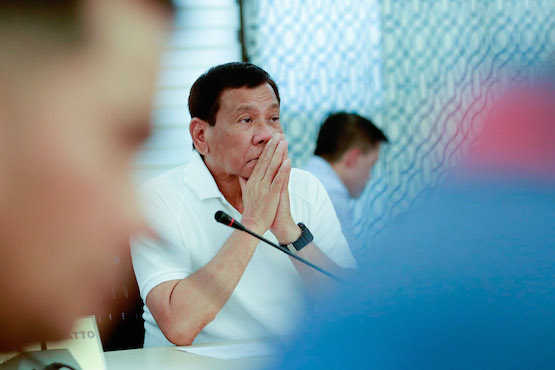 Philippine President Rodrigo Duterte listens during a security briefing on April 19 ahead of the Association of Southeast Asian Nations meeting in Manila from April 26-29. (Photo by Alfred Frias)

A complaint of "mass murder" was filed against Philippine President Rodrigo Duterte before the International Criminal Court in The Hague on April 24.

Jude Josue Sabio, a lawyer for a self-confessed hit man, filed the complaint against the president and 11 other Philippine officials for alleged crimes against humanity.

The 77-page complaint titled "The Situation of Mass Murder in the Philippines, Rodrigo Duterte: The Mass Murderer" alleges that Duterte masterminded the killings of suspected drug users and dealers.

Also accused of violating various provisions of the "Rome Statute" are the country's Justice secretary, National Police chief, House Speaker, Interior Secretary, the head of the National Bureau of Investigation, the Solicitor-General, and two sitting senators.

The "Rome Statute" is a treaty that established the International Criminal Court, which is responsible for trying perpetrators of genocide, crimes against humanity, war crimes, and the crime of aggression.

The Philippines ratified the "Rome Statute" in August 2011.

In a statement, Sabio said he filed the complaint to hold the Philippine president accountable "in the name of international criminal justice, and to once and for all end this dark, obscene, murderous and evil era in the Philippines."

The lawyer alleged that key government institutions failed to act on the killing of suspected drug users and dealers.

The International Criminal Court will only entertain a case if the state is unable or unwilling to stop the perpetration of the crimes.

"All in all, the 'repeated, unchanging and continuous' mass murder being conducted by Duterte has already resulted in the deaths of not less than ... 7,000 individuals in his war on drugs," read the complaint.

In a letter, Sabio asked international court prosecutors to conduct a formal investigation that could lead to the issuing of an arrest warrant for Duterte.

The complaint cited Duterte's "'I will kill you' mental state" and claimed "best practices" in fighting crime through the killings of suspected criminals.

In a statement, Duterte's spokesman, Ernesto Abella, said the timing of the filing of the case is "suspect," saying it was "apparently meant to create negative news."

The Philippines is hosting an Association of Southeast Asian Nations summit in Manila this week.

Abella expressed confidence that the complaint will go nowhere.

"These so-called 'extrajudicial killings' are not state-sanctioned or state-sponsored," he said, adding that authorities are conducting legitimate police operations.

"The intent of this filing is clearly to embarrass and shame the president, and undermine the duly constituted government of the Philippines," said Abella.