Somewhere between 500,000 and a million Uyghurs are believed to have been sent to re-education camps 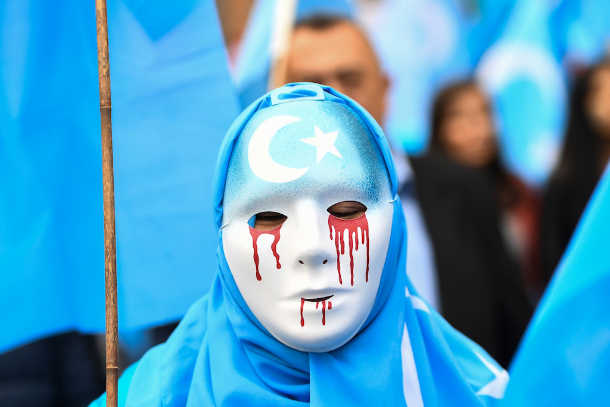 A person wearing a white mask with tears of blood takes part in a protest march of ethnic Uyghurs asking for the European Union to call upon China to respect human rights in the Chinese Xinjiang region and ask for the closure of "re-education centers" where Uyghurs are detained, during a demonstration around the EU institutions in Brussels on April 27. (Photo by Emmanuel Dunand/AFP)

As Chinese President Xi Jinping continues to ramp up his program of religious persecution, nowhere is it being executed with more intensity and violence than on the Muslim Uyghur community in the Xinjiang Uyghur Autonomous Region in northwest China.

But there is a new technological bent to the program, one many observers believe could see Xinjiang become the testing ground for the Communist Party to exercise Orwellian control over its citizens in new ways.

The latest move in China's campaign to weaken Uyghur culture, a campaign that was stepped up significantly after sectarian riots broke out on June 9, 2009, is the relocation of more than 416,000 people from Xinjiang, according to state media.

And that is only just the start, with plans apparently afoot to shift a further 100,000 of this Turkic ethnic group to elsewhere in the province.

As is the case with Tibet, journalists and rights groups are barred from this sensitive region, where between 500,000 and a million Uyghurs have reportedly been herded into so-called "political re-education camps."

Enclosed within thick walls topped with barbed wire, these are the very institutions that Xi, early in his administration, promised he would phase out. However they were quietly brought back to life in April last year, according to Radio Free Asia.

That is because the multi-pronged state-backed attack on the Uyghurs, who number between 11 million and 15 million, according to various estimates, has taken aim at both their culture and their religion.

The Communist Party wants to create a brand of Islam "with Chinese characteristics" as it continues to Sinicize the land under its control — if not wipe out Uyghur culture as we know it today altogether.

It was reported back in April that the re-education camps in Hotan — a city on the ancient Silk Road in an area famous for making high-quality rugs — had become so crowded people had to be shifted to other camps.

One of the key reasons for the congestion is a new suite of surveillance technology having been put to use in Xinjiang. It was initially tested in Kashgar, a Uyghur cultural heartland some 170km from the Pakistan border.

But this is where the narrative takes a decidedly Orwellian twist, a classic case of life imitating art.

In August 2016, the Xinjiang Bureau of Public Security posted procurement notices confirming the establishment of the "Integrated Joint Operations Platform" (IJOP), a system that receives data on individuals from many different sources, according to research by Human Rights Watch.

The notices show the IJOP gathers information from multiple sources or "sensors" including CCTV cameras, some of which have facial-recognition software or infrared "night vision." Other cameras are positioned in locations police consider "sensitive" such as entertainment venues, supermarkets, schools, and the homes of religious figures.

The authorities are also using so-called "packet sniffers" to intercept data "packets" and collect the information they contain, such as the unique identifying addresses of computers, smartphones, and other networked devices.

For many years now, Beijing has imposed a series of anti-Islamic rules on many Uyghur groups — especially those the state has publicly denounced as being "two-faced," or which won't bend to its rules.

China has restricted cultural norms such as the growing of long beards or the wearing of various forms of head garments for women.

During the holy month of Ramadan, when Muslims fast from dawn till dusk, Chinese authorities forced children in Xinjiang to eat during daytime hours, even though this is strictly forbidden according to their religion. This year Ramadan ran from mid-May to mid-June.

Religious persecution has also reared its ugly head in other ways, such as the mass sentencing of "terrorists" and "separatists" at criminal "trials" held at sports stadiums.

Like many outlying provinces such as Tibet, Inner Mongolia in the north and swathes of Yunnan in the southwest, Xinjiang was effectively annexed by the Communist Party following its 1949 victory over the Nationalists (Kuomintang).

As such, Xinjiang is far from autonomous. The same can be said for Tibet, the Hui Muslim enclave of Ninxia, and may other intra-state areas populated by any of the 55 ethnic groups that Beijing officially recognizes.

Xinjiang has a long and complicated history. It was largely brought under control by the Qing Dynasty, which ruled China from 1644 to 1912. Later, parts of the province became what is known as East Turkestan, with the backing of the Soviet Union. But after winning China's civil war in 1949, Mao Zedong subsumed it into the People's Republic of China and formally created the XUAR in 1955.

Some 93 percent of China's population identify as Han. But other ethnic groups claim they are often treated with suspicion and find it harder to land jobs despite enjoying other "benefits" such as being exempt from the country's "one child" policy, which is fast being phased out. However, some groups have reported on Uyghur women being subjected to forced abortions by the state to curb the population.

It makes sense for China to test its population-controlling technology on discrete ethnic groups, especially Uyghurs who are seen as posing an existential threat to a unified Chinese state as the insurgents among them bullets and bombs to fight for a separate homeland.

The XUAR borders Pakistan, Afghanistan and other Muslim nations in central Asia. Ironically, during Russia's war with Afghanistan, Beijing sent Uyghurs to help. It has acted similarly in other parts of central Asia, helping to radicalize some of the populations there.

Now Beijing is concerned that these porous borders will lead to well-trained Uyghur terrorists turning their attention on the Han Chinese. While these fears can be understood, however, it looks like a typical example of the state over-reacting to some perceived threat.

It is true there have been a series of random and unsophisticated attacks in recent years by groups of Uyghurs armed with knives, from Xinjiang to Kunming, the capital of southern Yunnan province.

But what does Beijing hope to achieve by incarcerating hundreds of thousands of people? Does it expect they will emerge from these facilities singing patriotic songs and toeing the party line?

More likely, they will start blowing things up.