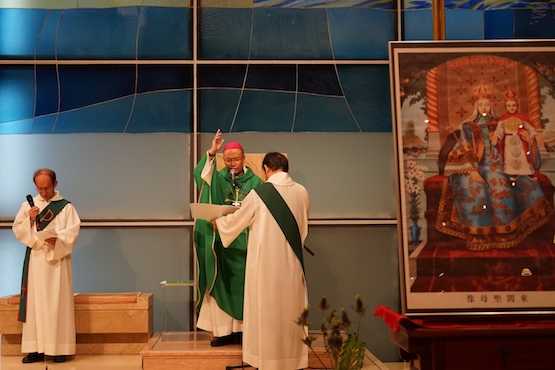 Bishop Michael Yeung Ming-cheung of Hong Kong at the Mass for Bishop Su Zhiwen who was forcibly disappeared on Oct. 8, 1997. (ucanews.com photo)

The Catholic Justice and Peace Commission of Hong Kong has held a Mass to pray for missing underground Bishop James Su Zhimin, who was seized by Chinese authorities 20 years ago.

The Mass was also dedicated to other clerics detained by Chinese authorities.

Or Yan Yan, a project officer for the commission, told ucanews.com that Bishop Su, from Hebei Province and now aged 85, is still in the hands of authorities.

Or noted that many people think the Catholic Church in China is developing well because they see it has beautiful buildings.

However, she said underlying problems remained, not least the detention of clerics such as Father Liu Honggeng of Baoding, Coadjutor Bishop Cui Tai of Xuanhua and Bishop Shao Zhumin of Wenzhou.

All three were current cases, said Or.

She noted rumors that Bishop Su is in a nursing home for the aged, but even if true, this was not the same as being free as it would still be a form of house arrest.

Bishop Su's family and others are still searching for him.

The commission has produced a pamphlet entitled "An Unforgettable Pastor" that details Bishop Su's life, including labor camp imprisonment during the 1980s.

Or said the bishop's persistence and faith inspires others.

Bishop Su was taken away 20 years ago during October, while this month is also the Month of Holy Rosary and Our Lady of China is the patron saint of his Baoding Diocese.

Bishop Michael Yeung Ming-cheung of Hong Kong presided over the Mass held Oct. 11 at St. Andrew's Church and attended by about 200 people.

In his homily, Bishop Yeung said dialogue rather than violent protest was needed to advance negotiations with Chinese authorities in relation to religious affairs even when there is resistance.

Bishop Yeung pointed out that the Vatican had said there needed to be "healthy, positive, rational and realistic thoughts" during such dialogue.

The church believed that while major principles should not be sacrificed, some less important and technical issues could be negotiated or put aside.

Bishop Su, due to his unwillingness to accept official state religious policies and refusal to join the government-controlled Catholic Patriotic Association, has spent more than half his life in prison or under some form of detention.

His last arrest was on Oct. 8, 1997, at a public market in Shijiazhuang, the capital city of Hebei Province.

Hebei Province has the largest Catholic population in China, while Baoding is a stronghold of the underground Church with more than one million Catholics.