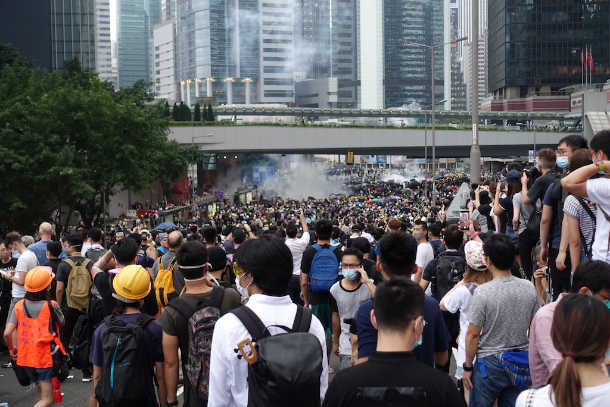 Police fire tear gas in an attempt to disperse protesters in the Admiralty area of Hong Kong on June 12. (ucanews.com photo)

A special Mass was held in Hong Kong after a day of protest turned violent and left two people in serious condition in hospital and at least 79 injured.

About 5,000 riot police fired tear gas, pepper spray and rubber bullets at thousands of protesters yesterday as they cleared streets around the city's Legislative Council.

Confrontations continued late into the night as the mostly young protesters were pushed back from the complex in the protest over a controversial extradition bill.

Auxiliary Bishop Joseph Ha Chi-shing met with a group of young Catholics before a special Mass for Hong Kong at Our Lady of Mount Carmel Church at 7 p.m.

In a tearful homily, he said he had been moved by seeing the young people as he walked from the diocesan center to the church.

“They just want to voice their demands. Why do they deserve that [violence]?” Bishop Ha asked. “I can’t understand why Hong Kong has become like this today. We just want to live freely. We don’t deserve it.”

Hong Kong Diocese released three statements to call for the government and the public to exercise restraint and seek a solution to the dilemma through peaceful, rational channels. It asked the faithful to pray for the city.

The Colloquium of Six Religious Leaders of Hong Kong, which comprises representatives of the Catholic Church, Protestant Church, Buddhism, Taoism, Islam and Confucius, also released a statement calling on the government and the public to seek a solution in a restrained and peaceful manner.

Bishop Ha said he would discuss the situation with Cardinal John Tong, the apostolic administrator of Hong Kong.

Hong Kong was quiet today as police maintained a heavy presence around the Legislative Council Building and in the Admiralty area, CNN reported.

The legislature said no meeting to discuss the extradition bill would be held today in a victory for protesters and opposition lawmakers who have been calling for it to be postponed or dropped.

Despite the mass protest, Hong Kong's Chief Executive Carrie Lam has refused to withdraw the extradition bill, saying it is needed to plug loopholes to prevent the city from becoming a haven for mainland fugitives.

Although Hong Kong is part of China, it has separate laws that follow a British-style system and has no capital punishment, unlike mainland China. Many people fear that the proposed extradition law means they could be taken from Hong Kong by Chinese authorities for political or business offenses.

Opposition lawmakers have accused the police of using excessive force and likened the violence to scenes associated with mainland China.

"The protesters joined the rally with Hong Kong's best interests at heart," pro-democracy lawmaker Leung Yiu-chung said. "The government has no heart at all."