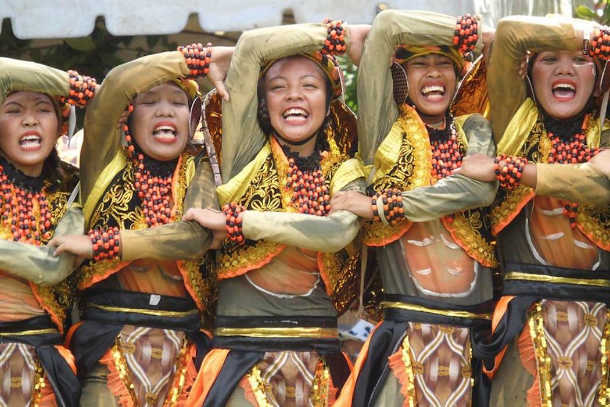 Local performers entertain visitors during the celebration marking the 498th anniversary of the arrival of Christianity in the central Philippines on March 31. (Photo by Rhoel Amazona)

A group of young Filipino Catholics in the central Philippines wanted to "reaffirm" their faith, so they decided to take a boat to an island called Limawasa.

The island, about 10 kilometers long from north to south, is believed to be where the first Mass on Philippine soil took place on March 31, 1521, celebrated by Father Pedro de Valderrama. The priest came with Portuguese explorer Ferdinand Magellan who was looking for the land of spices. This year marks the 498th anniversary of the first celebration of the Eucharist in this part of the world, so Cherline Carbonilla, 22, thought it would be good to go there for the anniversary celebration."Coming here is like reinforcing my belief," she said after spending a night camping on the cold ground where the first Mass was supposed to have been celebrated.Abbie Jean Tampos, a 26-year-old youth leader, was shepherding the flock of 14 young people wanting "to strengthen their Catholic faith.""[Attending the celebration] has helped them understand and appreciate the history of the birth of Christianity in this country," said Tampos.About 3,000 mostly young people took the 45-minute boat trip to Limawasa from the nearest large island to attend the anniversary celebration."I understand the joy of this event," said Archbishop Gabriele Giordano Caccia, apostolic nuncio to the Philippines.Archbishop Caccia, who celebrated the Mass, said, "the presence of the Church, the presence of Christianity has shaped this country."He said the first Mass, which was most likely attended by only a few people, "was like a seed put in the soil.""Now that seed has become a big tree," said the prelate.According to history books and official records, Magellan and his men came ashore on Limasawa on March 31, 1521, and celebrated Easter with an early morning Mass."Who knew at that time that on a remote island in the Pacific somebody was saying Mass? Back there, they didn’t even know that there were lands and islands here," said Archbishop Caccia."We are grateful to those who came," he said. "But as they came, they went. But faith stays," said the prelate, adding that the legacy of the first Mass "is not only language and culture but the gift of knowledge of the true God."The papal nuncio said the birth of Christianity in the Philippines inspired Filipinos "to share, to announce to people this Good News." Residents of Limasawa in the central Philippines re-enact the arrival of Portuguese explorer Ferdinand Magellan on the island 498 years ago on March 31. (Photo by Rhoel Amazona)

Amid the celebrations, however, a resident of the island warned that the Catholic Church is fast losing adherents.Rommel Labastida said church leaders have to speed up efforts to reach out to people, especially the youth."Most have gone astray," he said.

Limasawa, which has a population of about 6,000 in six villages, is now home to at least 12 religious sects whose chapels stand a few meters from each other.

Danny Sindo, a 45-year-old resident, said the sects started arriving on the island in the 1970s when no Catholic priests came to visit, unlike these days."I am just happy that this time there are already plenty of church workers and religious activities in our island," said Sindo.Archbishop Caccia thanked the people of the island for welcoming him while trying to compare how the natives welcomed Magellan 498 years ago."I see the same spirit of warm welcome is still present in you like your ancestors," said the archbishop who joined the people in a religious procession of the image of the Child Jesus."You received the image of the [Child Jesus] and you received also the faith, the Christian faith," said the papal nuncio.The prelate told the faithful that the faith that started in Limasawa "is like a light" amid the darkness."This candle reminds us that the true light is Jesus. Those who follow Jesus will not walk in darkness," he said.