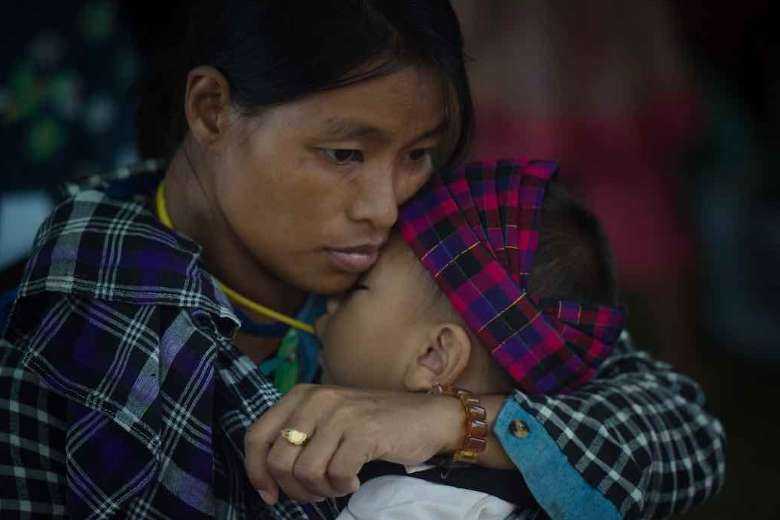 In this picture taken on May 13, 2018, an internally displaced woman and a child look on at a temporary shelter at a church compound in Myitkyina, Kachin state. More people have been displaced since the military coup in February 2021.  (Photo by Ye Aung THU / AFP)

Religious buildings including churches have continued to be primary targets for the military junta in conflict-torn Myanmar where Christians represent a minority.

The latest incident happened last week when junta soldiers destroyed a statue of Mary and encamped in a Catholic chapel and caused havoc in Tadaku village in southern Shan state, according to Church sources.

The village is under Lonke parish which belongs to the diocese of Pekhon.

One Church source said the Marian statue was erected along with a waterfall three years ago near Tadaku village which is in the territory of Pa-O Self-Administered zone, home to Kayah communities.

Soldiers regularly raid church institutions including places of worship under the pretext of looking for suspected rebels or hidden weapons and often resort to violence.

The latest military target came when it stepped up its offensive against local militia groups around Pekhon town, southern Shan state, where they have deployed airstrikes and artillery shelling.

Pekhon diocese is one of the worst affected areas along with the nearby Loikaw diocese in Kayah state due to the escalating conflict since last May.

At least six parishes have been abandoned while churches including Sacred Heart Cathedral have been attacked three times and damaged in Pekhon diocese due to the ongoing conflict, according to Church sources.

More than 5,000 people from Pekhon diocese have been forced to flee from their homes since last year and remain in church premises in the diocese of Taunggyi.

A Church social worker said the situation in Pekhon diocese remains tense as fighting is still raging in the region and internally displaced persons (IDPs) are unable to return to their homes.

“Amid ongoing fighting and restrictions imposed by the junta, we are struggling with providing humanitarian assistance to the IDPs,” the social worker told UCA News.

He said at least 5,000 people from Pekhon diocese have been forced to flee from their homes since last year and remain in the church premises in the diocese of Taunggyi.

More than 140,000 civilians including Catholics from Loikaw and Pekhon dioceses in Kayah and southern Shan state have been forced to seek refuge in churches, makeshift camps and in the jungle while the military has been targeting priests and pastors, bombing and vandalizing churches in predominantly Christian Kayah, Chin and Kachin states.

Despite many religious leaders including Pope Francis calling for the protection of places of worship and an end to the violence, the junta has shown no signs of easing the oppression of civilians in ethnic regions and villages where the Bamar majority resides.

More than 1,800 people have lost their lives in the brutal crackdown by the military and over 13,000 people have been detained since February 2021.