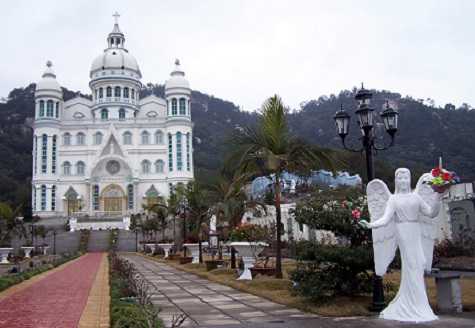 Southeastern China’s most famous pilgrimage site wouldn’t be here today had it not been for an act of kindness 20 years ago by Xi Jinping, the new Chinese president.

The Rosa Mystica Sanctuary in Fuzhou diocese is a large, white, eye-catching complex built on a hillside near the coastal city of Changle.

Managed by 10 nuns, the holy site receives more than 10,000 Chinese pilgrims and foreign visitors each year.

It developed from a small compound which Bishop Joseph Zheng Changcheng of Fuzhou built in his hometown in 1993 to live out the remainder of his life. However, the bishop's little project almost failed to get off the ground.

Sister Zheng Wenying, who is in charge of the sanctuary, said the site was threatened by a government ban on illegal religious venues during its construction.

“Xi Jinping, then Fujian’s Communist Party Committee Deputy Secretary who oversaw religious affairs, showed great understanding and respect toward the elderly bishop, so the government approved the shrine in 1996,” she told ucanews.com. The government also granted tax exemptions and simplified procedures for examining and approving construction of new buildings at the sanctuary.

Since then, new structures have been added to the complex, including a church, gardens, statues and carvings that depict the Stations of the Cross, the mysteries of the Rosary and angels in various poses.

On July 13, the shrine celebrated its 20th anniversary. Unfortunately, celebrations, which included a Marian procession, were cut short by Typhoon Soulik, which swept across Taiwan and hit Fujian head on.

About 2,000 people from Fujian, Guangdong, Hunan and Zhejiang provinces packed the hilltop of Our Lady of Rosary Church to attend a solemn Mass in the morning before the weather set in.

During the celebration, the pilgrims commemorated the late Bishop Zheng, whose ashes were interred under an altar in front of a memorial building dedicated to him.

This two-story building houses 20,000 books on Chinese culture, philosophy, Christianity and other religions. Many of the books are original editions that survived the Cultural Revolution (1966-76) and were collected by Bishop Zheng.

The Vatican-approved and government-recognized prelate died in 2006 without fulfilling his wish to reconcile “open” and “unregistered” Catholics in his diocese.

The open community in Fuzhou diocese has not had a bishop since then, while the unregistered community, which has a strong presence in the area, has been divided into two hostile factions for several years.

The split has been caused by a power struggle between the underground bishop and the apostolic administrator.

Sister Zheng said it was painful to see Church communities divided and attacking each other.

“How can we spread the Gospel when we fail to bear witness to the one, holy, Catholic and Apostolic Church?” she lamented.

Despite the disputes, the nun said unregistered Catholics are friendly towards the sanctuary and often come on pilgrimages, which would have pleased the late bishop.

The sanctuary’s popularity continues to grow. Construction of a new and bigger hostel to accommodate more pilgrims, and facilities to conduct retreats and training course are already underway.

Some 20 years on both the sanctuary and its savior, Xi Jinping, have gone on to bigger things.