The Daughters of St. Paul nuns were left disappointed with the 72nd pilgrimage to the National Marian Shrine that concluded on Sept.12.

“We were soaked by rain. The pilgrimage site was flooded this weekend. All carpets laid out for pilgrims were soaked and the gathering was much smaller than usual,” Sister Nazia Salamat told UCA News.

“The authorities were also very strict in enforcing social distancing, while mobile vaccination teams visited all stalls and made sure all those running them were vaccinated. The pilgrims couldn’t move around freely.”

Sister Salamat was one of four Pauline nuns and three postulants who camped outside St. Mary and St. Joseph's church in Mariamabad, a village in Punjab province for the country’s largest Catholic pilgrimage called ‘Mother Mary Queen of Mercy’ held from Sept. 10-12.

More than 1.2 million people visit Mariamabad annually. But many couldn’t attend this year because of the coronavirus pandemic and torrential rain which brought flooding and mudslides that destroyed many homes and killed at least 17 people in northern Pakistan.

Five people, including children, were killed during heavy downpours in areas in and around Lahore on Sept 10.

Father Abid Albert, in charge of traffic for the Marian pilgrimage, said conditions for the pilgrimage were very difficult.

“Saturday [Sept 11] wasn’t a good start either. The wet carpets were replaced with those from parish houses and the church. We were not sure about the prayers scheduled on Saturday but Mother Mary later blessed us with beautiful weather. We had placed signs to better manage the traffic and allotted parking spots for different vehicles but the rainwater swamped those grounds too,” he told UCA News.

“Only the buses emblazoned with pilgrimage banners and a letter from the respective parish priest were allowed in the village. Some 350 Catholic youths were trained by police for security. About 2,000 police officials remained on guard for three days. Our volunteers also distributed face masks at the police check posts.” 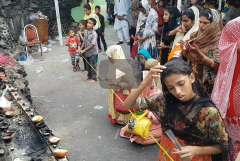 Despite the challenges and fewer numbers, those who braved the journey kept pouring in the church chanting “Praise Holy Mother Mary.” The program was punctuated with tableaus, healing prayers, sharing of testimonies, rosary recitations and supplications against religious persecution.

Addressing the opening Mass, Archbishop Sebastian Shaw of Lahore urged everyone to get vaccinated.

“We spent last year in our homes, afraid of coronavirus. Many became unemployed, some died. We pray for their families. Keep your masks and save others. It is your national responsibility as a good citizen,” he said.

Last year, Punjab’s government called on the pilgrimage committee to cancel the event due to the pandemic. Only parishioners from Lahore Archdiocese were allowed to pray at the grotto and had to leave within an hour.

“This year we began making announcements for people to be vaccinated three months before the pilgrimage. Ninety percent of pilgrims were vaccinated. I congratulate all for following the health regulations,” said the archbishop.

This January, Punjab Governor Chaudhry Mohammad Sarwar ordered the construction of a 4.1-kilometer road from Sheikhupura district to Mariamabad at a cost of 66 million rupees (US$411,000) and announced the installation of a filtration plant at the National Marian Shrine in Mariamabad. One side of the road has been completed.

The master plan includes the construction of rooms for visitors, provision of gas and addressing electricity cuts in Mariamabad.

“The archbishop stands by us whether it’s religious tourism or denationalization of missionary institutes. NCOC [National Command and Operation Centre] bans gatherings in the whole country in the season of the pandemic. However, we made them realize the importance of this religious event. We couldn’t ignore it,” Augustine said.