Marcos and the need to forgive

Christians have a duty not only to forgive, but to first seek justice 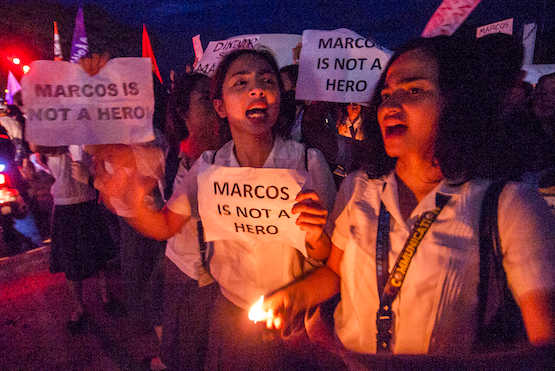 Students from a Catholic school in Manila walk out of their classes to protest the burial of former dictator Ferdinand Marcos in the country's cemetery for heroes. (Photo by Angie de Silva)

He divided the nation before, and he continues to divide it to this day.

The truth is, it won't be very easy for many Filipinos to simply move on. The atrocities of the past are still fresh in the memory of the victims and their families. But the Marcos family has taken advantage of the Supreme Court's ruling that there was no legal barrier against burying him in Manila's Heroes' Cemetery. That it happened so fast — like a thief in the night according to the vice president — was a double insult.

As if that were not enough, Marcos' defenders started appealing to the Christian duty to forgive. Many have readily commented that forgiveness demands justice and accountability.

By contrast, Marcos' daughter, Imee, has done the rounds to remind the public that there was nothing to apologize for. She repeatedly said they were too young then.

Never mind that she was the president of the national youth federation in those days and that her brother was chairman of the Philippine Communications Satellite Corporation, which channeled illegal funds to other countries. Recently, even President Rodrigo Duterte expressed his wish that the burial would completely seal the pain of the past.

These days, religious virtues are being used against the victims of the past. The shift was all too sudden in fact.

In July, the president in his State of the Nation address, castigated human rights activists for getting in the way of progress. Discipline and social order became national virtues used to legitimize the war on drugs, which, to date, has left more than 4,000 people dead. These days, the administration and the burial's advocates speak of forgiveness for the sake of moving on.

One wonders where forgiveness was as the war on drugs raged on.

And to make it worse, apologists who profess to be Christian have accused everyone else of bitterness and hypocrisy. Even Evangelicals have hijacked the discourse, arguing instead that in the final analysis all of us are as sinful as Marcos, needing grace and mercy. With this message, they have chosen the path of peace, which to them means silence.

Yes, they will have their personal peace. But in their silence, injustice will go on. The prophet Ezekiel saw this a long time ago: "They lead my people astray, saying, 'peace,' when there is no peace. When a flimsy wall is built they cover it with whitewash."

What just happened? The appeal to forgiveness has rendered a private affair what was in fact a systematic series of social evils: corruption, murder, and thievery. In other words, in their desire to frame the burial as a moment to forgive and move on, they have (wittingly or otherwise) neglected that the evil of a regime has longstanding consequences that the rest of the nation is still paying for.

It must have been the most painful funeral in recent history. Not because someone died and he was surrounded by great accolades — but because till the end he kept dividing the nation. And there are no signs of unity anytime soon. To blame those who continue to struggle for justice is a terrible mistake.

The family of Marcos will go down in history as preachers of peace but created none. They have invoked forgiveness and this will remain to be their emotional rhetoric. Christians, however, have a duty not only to forgive, but to first seek justice. The struggle for peace is the struggle to right what's wrong.

We struggle not only for ourselves, or the victims of martial law. But for the rest of the nation whose deepest cry, admittedly, is to move on.