More than two months after the fighting in Mindanao ended, hundreds of thousands still wait for rebuilding to begin 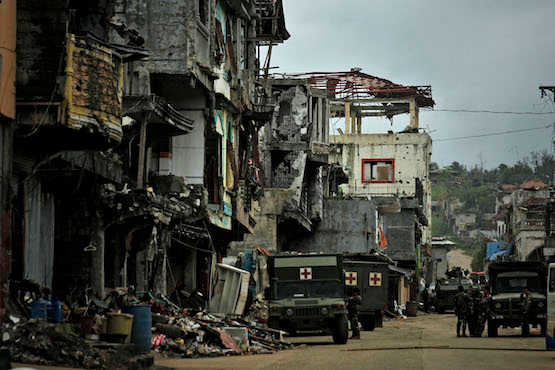 The rebuilding of the devastated city of Marawi in the southern Philippines is set to start in the second quarter of 2018. Meanwhile, many of the close to 400,000 displaced residents remain in temporary shelters outside the city. (Photo by Vincent Go)

The five-month deadly conflict in the southern Philippine city of Marawi in 2017 not only left a city destroyed but also scarred survivors leaving them with nightmares that will likely haunt them for the rest of their lives.

The scenic lakeside city was jolted by gunfire on May 23 when Islamic State-inspired gunmen attacked, resulting in an exodus of about 400,000 people from their homes.

The following months became a nightmare for government and private aid agencies that struggled to address the needs of the mostly Muslim population.

After the fighting, the Philippine government reported that about 1,100 people had been killed. Most were terrorist gunmen who launched the attack to establish an Islamic state in the city.

Jamil Ampaso, a father of 12, condemned the terrorist attack but he also expressed dismay over the devastation brought about by the military aerial strikes on his hometown.

The government announced that it would cost about US$1 billion to rehabilitate the city.

"The war did not only disrupt the schooling of our children, it also destroyed our livelihoods," Ampaso told ucanews.com. "I don’t know how we can start again," he said.

President Rodrigo Duterte has placed the entire southern region of Mindanao under martial law. The Philippine Congress decided to extend it until the end of 2018.

More than two months since the end of the fighting, Marawi's main battle area that straddled 14 of the city’s almost 100 villages remained largely off limits to civilians.

"Many of those who returned left again after seeing their houses destroyed and looted," said Aminoden Macalandap, a local lawyer.

He told ucanews.com many people either went back to temporary shelters provided by the government or aid agencies outside the city or live with relatives in other parts of Mindanao.

Macalandap, who heads the provincial chapter of the Integrated Bar of the Philippines, said basic services are yet to be restored while markets are still empty.

Eduardo del Rosario, head of the task force organized to help rebuild the city, said that 1,100 transitional shelters will be ready for occupation this month.

The reconstruction of the city will only start in the second quarter of 2018.

Del Rosario said various agencies are still assessing the situation and recommendations from different groups are still to be looked at.

Macalandap complained that there has been "no clear citizen’s consultation so far" in the planning stage of the rebuilding of the city.

"Those affected should be given major roles in the rehabilitation in deference to the cultural and religious sensitivities of the Maranao," he said.

The Muslim Maranao is the predominant ethnic group in the city.

Macalandap warned that a "thorny issue" of land ownership should be addressed following the discovery that portions of Marawi are part of a military reservation.

The lawyer also noted the need for transparency, especially on the millions of dollars that have been donated for the recovery and rehabilitation of the city.

Catholics around Marawi have responded to the needs of their neighbors by organizing what they called "Duyog Marawi" to help in the healing process for those most affected by the fighting.

"Duyog" is a Visayan term for accompaniment, often understood as the act of playing a musical instrument to accompany a singer or a dancer.

Bishop Edwin dela Pena of the Prelature of Marawi said about 100 Muslims and Christians have already volunteered to work for the program in partnership with Redemptorist missionaries.

The prelate said "Duyog Marawi," which involves Muslim religious leaders, is anchored on the church’s advocacy to promote interreligious harmony "in celebration of life and faith."

Catholic dioceses from across the country and individuals have already started sending donations for the implementation of the program, said the bishop.

The program focuses on health and wellness, healing and reconciliation, communications and protection of vulnerable sectors.

Bishop Dela Pena said the program aims to ensure that people’s faith and culture are "paid attention to and factored into the rebuilding process of Marawi and people’s rights are protected."

Jamalic Umpar, a 24-year old Maranao whose family fled Marawi, said he volunteered to work in the program "to foster unity and camaraderie between Muslims and Christians."

Despite the scars left by the conflict, survivors are hopeful that the tragedy will bring something new to their lives.

Father Teresito Soganub, who was taken hostage by the gunmen on the first day of the attack, said the siege will haunt him for the rest of his life.

"I was angry with God for putting me in such a horrible situation," said the priest. "However, my faith in the Lord did not waiver. In fact it even became deeper," he added.

He said his 116-day ordeal in the hands of the terrorist gunmen deepened his faith in God and made him more prayerful. "I prayed more feverishly than I used to do," he said.

For Bishop Dela Pena, Catholics in the predominantly Muslim city "are here to support and accompany [our neighbors] all the way."

"We are conscious that the mission of rebuilding the city belongs to the people of Marawi," said the prelate.