Members of the Maratha community stage a demonstration at Deulgaon Raja in Buldhana district of Maharashtra on July 24 to demand job and education quotas. (Photo by IANS)

Violence broke out in parts of the western Indian state of Maharashtra as a caste group destroyed public property and blocked traffic to press their demands for quotas in government jobs and educational institutions.

Several highways and main roads in capital Mumbai, the financial hub of India, were blocked on July 25 when Maratha people called a day-long shutdown of the city.

Several Maratha groups, including the prominent Maratha Kranti Morcha revolutionary group, are demanding they be allowed quotas for jobs and education to improve their poor economic status.

The Indian constitution allows such reservations for socially poor Dalit and tribal people but Marathas are not included as their caste is not considered a socially deprived group.

The protest intensified after a person committed suicide on July 23. Kakasaheb Shinde, 27, jumped off a bridge over the Godavari River in Aurangabad district. He was pronounced dead at hospital.

A policeman died and nine others were injured when protesters clashed with police on July 24 as other protesters attempted to commit suicide.

"The shutdown in Mumbai was largely peaceful," said Abraham Mathai, former vice-chairman of the state Minority Commission and a Christian leader who lives in the city.

Auxiliary Bishop Barthol Barretto of Bombay told ucanews.com that the shutdown and violence in some pockets of the state had not affected normal life in the city.

"We are working as usual and our centers, education institute and other offices are functioning like any other days," he said on July 25.

Joseph Dias, general secretary of the Mumbai-based Catholic Secular Forum, told ucanews.com that he hoped people would not take the law into their own hands. 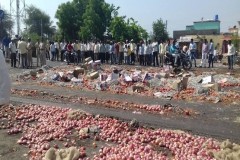 Maratha leader and Legislative Assembly member Harshvarshan Jadhav told media that the quota demand has been going on for a couple of years but the state government has ignored it. "If the government continues with this attitude, we will intensify the protest," he said.

Archdiocesan spokesman Father Nigel Barrett said the Maratha people have not made clear what they want. "Unless it is clear, we will not be able to make a comment on it," he said when asked if the church supported the movement.

Christians form 1 percent of Maharashtra's 112 million people, while Maratha people number about 56 million in the state.