Prolonged closure of schools during pandemic, ailing economy among main reasons so many children feel despondent 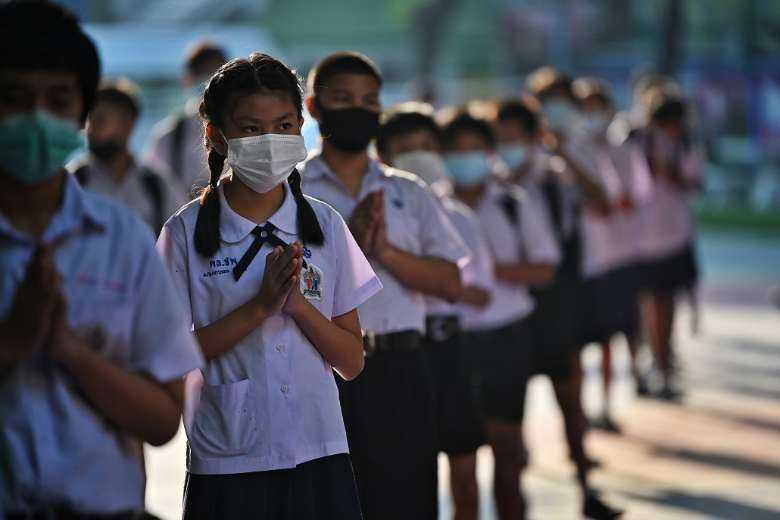 Students attend morning assembly as schools reopen due to the easing of restrictions after a temporary closure to combat the spread of Covid-19 in Bangkok on Feb. 1, 2021. (Photo: AFP)

Many Thai children are at risk of committing suicide, according to a new survey by the Department of Mental Health.

The department said 8 percent of Thai children under 18 who were asked about their mental state between Feb. 12 and May 23 said they had thought of ending their lives.

The result of the survey is in line with recent findings by the World Health Organization that one in seven youngsters in the Buddhist-majority nation suffer from mental health issues.

Experts say the prolonged closure of schools during the pandemic and a severe economic downturn are among the main reasons that many Thai children are feeling despondent.

Regimented school rules such as compulsory hairstyles for both boys and girls also prevent young Thais from feeling self-confident and being able to express themselves, some experts say.

“I don’t think that strict regulation of hairstyles is related to disciplinary training as so many people claimed. Hairstyle is not an indicator of learning efficiency. We need to change as cutting hair to fit the old rules has destroyed one way for children to learn more about themselves,” Dr. Jiraporn Arunakul, a medical specialist for adolescents, said during a panel discussion this week.

Several outspoken high school students have been campaigning publicly for years against what they view as overly strident rules in schools such as regulated hairstyles and compulsory uniforms.

The issue of mental health problems among Thai children was highlighted earlier this month when a 14-year-old girl from a broken home hanged herself over her dire financial situation and her problems at school.

Before her suicide, the girl mentioned feeling despondent over her family and financial situation in a post on Facebook.

Substandard mental health provision is one of the driving causes of suicides in Thailand, experts say, although efforts are underway to provide easier access to suicide prevention measures through hotlines and other means.

The Mental Health Department has also stepped up its efforts to train teachers at schools and colleges so that they can recognize warning signs that indicate mental health issues among their students.

However, experts have warned that more needs to be done as many schools lack sufficient resources to monitor and deal with mental health problems among students.