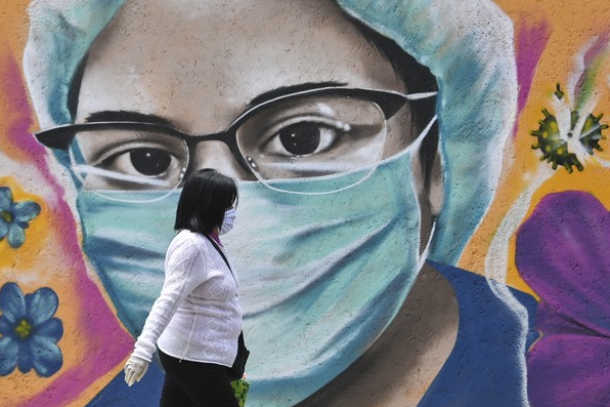 In southern Mexico's Chiapas state, customs and traditions have proven stronger than any warnings that come about Covid-19.

Priests like Father Gustavo Andrade of the Diocese of San Cristobal de Las Casas report widespread skepticism in Chiapas over Covid-19, its origins and its impact — even as the pandemic claims lives and collapses an already dilapidated health system. Conspiracies have also surged — spread on social media and messaging services such as WhatsApp — that the government itself is "poisoning" the population and hospitals are killing people, he said.

In the mostly indigenous municipality of Venustiano Caranza, "on Good Friday more than 4,000 people took to the streets and they were packed in very tight. They couldn't even walk carrying the Nazarene," Father Andrade recalled. "For people here, their customs, their traditions, are stronger than any order that comes from the pope."

"They don't accept that coronavirus exists," he said. "It's a total closure on this, and it's why there were these acts during Holy Week and on feast days."

By mid-July, Chiapas, Mexico's poorest state, had recorded more than 5,200 Covid-19 cases and nearly 750 deaths, the federal health secretariat said. Father Andrade, however, suspects undercounting, as widespread testing is not occurring in Mexico, and people are not going to the hospital.

The Diocese of San Cristobal de Las Casas has slowly started to reopen churches for prayer, but continues to celebrate Mass behind closed doors. There is pressure to reopen: Two priests at St. Thomas the Apostle Parish in the municipality of Oxchuc said in a July 4 letter to their bishop that residents threatened to restart activities on their own "due to their thinking that (the church) is staying closed because the padres don't want to work and they're scared ... of the health authorities."

But the three priests interviewed by Catholic News Service see more than stubbornness on the part of the indigenous Maya populations.

"In the cosmovision of these communities is unity," said Father Marcelo Perez, diocesan director of social ministries. "When someone falls ill, they come together to help them, to show solidarity. And when they receive orders to isolate, it causes enormous conflict for them."

Father Perez also attributes the skepticism to a deep distrust of the government, which, he says, has a history of lying to indigenous peoples and the popular classes, for matters much more trivial than a pandemic.

Chiapas is also known for the Zapatista uprising in 1994. Some Zapatista communities continue operating autonomously, and supporters say the government has not respected the agreements ending the conflict.

"They have long been deceived, and it's one of the reasons that they think (Covid-19) is a government lie," Father Perez said. "It like the boy who cried 'wolf,' when it actually is true and nobody believes it."

The deep distrust has led to conspiracy theories spreading, including the idea that crews spraying to stop mosquitoes from spreading dengue are instead spreading the coronavirus.

The Chiapas state government says at least 10 municipalities have impeded anti-dengue efforts. Health clinics have been attacked by suspicious populations.

"It's simply the result of badly interpreting rumors: They want to kill us, that it's not true, that this is all an invention of the government, that if we go to the hospitals we will die," said Jesuit Father Pedro Arriaga.

"It's a defensive posture from the community itself, which identifies state power or the government as the enemy of the people and wants to defend itself from what (they believe) the government invents and these government movements directed against them."

Father Andrade saw the situation get out of control in Venustiano Carranza, where locals burned down the city hall and the mayor's home in May, after rumors spread of fumigation crews spreading the coronavirus. The local government declined comment, citing the ongoing investigation.

Father Andrade has worked to dispel myths and usually cites his own example; he contracted Covid-19 and recovered. He has also seen some progress.

"Almost no one would wear a mask" when news of the coronavirus first arrived, Father Andrade said. "If you now go into the town, one-third of the people now use a mask."