Manila's poor have church brought to them 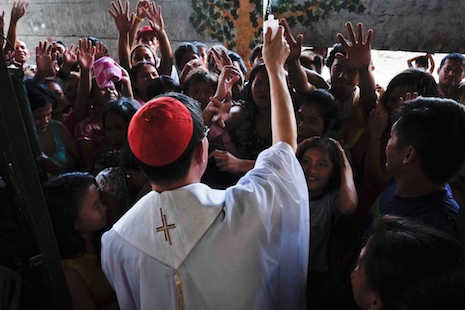 Cardinal Luis Antonio Tagle of Manila sprinkles congregants with Holy Water after celebrating Mass in an urban poor community in the Philippine capital on Jan. 3. (Photo by George Moya)

How does one inspire hope among Manila's poor whose future seems to be bleak despite the economic gains being trumpeted by financial experts?

"Where else can we find God's light today?" asked Cardinal Luis Antonio Tagle, of Manila, during his first Sunday Mass of the year with Manila's urban poor in the slums of Tondo district.

"As you can see, amidst their poverty, they know how to celebrate life. Here, hope is very much alive," the prelate told ucanews.com after celebrating Mass with residents of Helping Land, an urban poor hamlet.

Cardinal Tagle described the aspirations of the poor as the "proverbial light in the dark, of dreams that don't die."

"That is epiphany in action," he said. Cardinal Luis Antonio Tagle of Manila walks with children in an urban poor community in the Philippine capital on Jan. 3. (Photo by George Moya)

The hamlet of Helping Land, along with Happy Land and Aroma, was once a relocation site for Manila's poor until it became a dump.

The stench of the garbage permeates the air in the densely populated neighborhood. The muddy earth smells of filth.

The nongovernmental organization Project Pearls has been trying to help uplift the living condition of people in the area through a daily feeding program and after-school programs for children during weekends.

Monica Aclan, Project Pearls' executive administrator, said they invited Cardinal Tagle to celebrate Mass because "people here are not able to go to church that much."

"So we brought the church here," Aclan said.

The cardinal walked through the alleys of Helping Land in his black rain boots early Jan. 3. The people welcomed him with cheers as the prelate made his way to the courtyard to celebrate Mass.

"We have our own pope," shouted a mother who was clutching her baby. She approached Cardinal Tagle, who held his hand to her forehead, a Filipino way of showing respect.

Cardinal Tagle laughed and returned the gesture of respect by bring people's hands to his forehead. Cardinal Tagle greets residents of Helping Land, an urban poor hamlet in the district of Tondo in Manila, on Jan. 3. (Photo by George Moya)

The people calls the cardinal "Father" in a community where fathers seemed not interested in attending the Eucharist. The prelate's popularity seems to be not enough to attract the interest of the men of Helping Land with only three fathers attending the Mass.

"That's why when I get the chance, I encourage the fathers to attend Mass," Cardinal Tagle told ucanews.com.

"When they become responsible, not only in religious activities, but in the whole scheme of raising their children, it has a very positive effect on their sons and daughters," he said. Cardinal Tagle poses with children in a Manila slum on Jan. 3. (Photo by George Moya)

In his homily for the Feast of the Three Kings, Cardinal Tagle likened parents to the Star of Bethlehem, "the shining light of children."

As guiding stars, parents should make sure their children tread the right path, to help them fulfill their dreams, and raise them as good Christians, the prelate said.

Cardinal Tagle pointed to a "parol," a Filipino traditional Christmas lantern, and asked the congregation what it is.

One boy shouted in Tagalog, "A star without luster" — the title of a popular Filipino song that was adapted into a movie.

Everybody laughed, including Cardinal Tagle who quipped "A shining star." He explained to the child that the "parol" symbolizes the star that guided the three kings to the birthplace of Jesus.

"It's also the star that symbolizes hope," he said.

Many Filipinos believe stardom is a way out of poverty, with many celebrities coming from humble beginnings. In a celebrity-crazy country, the many narratives of rags-to-riches stories have spawned millions of hopes of making it big in the entertainment industry.

When the Mass ended, Cardinal Tagle again walked through the same muddy path, but with a bunch of children in tow.

Perhaps awed by the popularity of the prelate, one of the children asked, "Are you a star?"